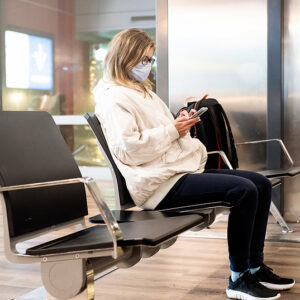 Most in Delaware Valley Give Mask Mandates a Thumbs Down

Plane loads of people rejoiced when they learned a Trump-appointed federal judge struck down the mask mandate on planes, trains, and buses Monday.

But the Biden administration’s Department of Justice plans to appeal that ruling.

“Once again, the Biden Administration defaults to government overreach and fighting for forced mandates, rather than trusting Americans to make smart decisions on their own, or actually trying to lead people in a certain direction,” said Christian Nascimento, a Republican running for Congress in Montgomery County. “I was actually on a flight when the announcement came over that the airline would no longer enforce the mask mandate. Passengers broke into applause.”

At Philadelphia’s airport, people must wear masks inside, as required by the city’s latest mask mandate, but they can remove them once they are on their plane.

Heather Redfern, airport public affairs manager, said, “While our airline partners are no longer requiring masks on planes, a current City of Philadelphia Department of Health mandate requires everyone to wear a face mask in public indoor settings in the city…Enforcement includes signage and employees reminding passengers and staff of the city’s mandate. The airport has free masks available for all that need them.”

If the Biden administration is counting on support from Pennsylvania’s elected officials, it will be disappointed.

Sen. Pat Toomey’s (R-Pa.) spokeswoman said he was “part of a bipartisan majority who voted to strike this mask mandate down.”

“We are at a place where those who want to be vaccinated can be readily vaccinated,” said Rep. Chrissy Houlahan (D-Chester/Berks). “We are at a place where people have educated themselves on the benefits of masking. And we are at a place where our schools, businesses, offices, and services are open. Because we have done the work over the past two years to successfully allocate federal resources to provide things like therapeutics, tests, vaccines, boosters, and masks to our community, I’m not supportive of a mask mandate at this time.”

She also said she is “continuing to push for bipartisan COVID funding” and plans to keep wearing her mask and getting tested.

Guy Ciarrocchi, one of the Republicans running in the May 17 primary to oppose Houlahan in November, said, “Biden’s decision to appeal this ruling is outrageous. Mandating masks in April 2022 defies science and common sense. Moreover, it shows how out-of-touch he is. I call on Congresswoman Houlahan to join with me in demanding that Biden drop this appeal.  If they won’t stop this madness, I will be part of the next Republican Congress that will.”

“I think it is complete nonsense,” said Ron Vogel, another Republican in the 6th District primary. “The only good thing that has happened in this country since Joe Biden has been in charge is that the mask mandate was lifted.  It was lifted because President Donald Trump appointed a judge with the courage to do it.  My opponent, Chrissy Houlahan, is anti-science. She supports all of the draconian mandates and lockdowns. Earlier this week, she held a town hall that ignored the science. She specifically picked a venue that required everyone to show a vaccine card in order to enter.”

Former Ambassador Carla Sands, a Republican running for the U.S. Senate, cited a 2020 Danish study that showed no statistical difference between wearing and not wearing masks.

“I am opposed to any mandates. I think they’re unconstitutional. I think people need to read and educate themselves and make the best decision for themselves,” Sands said during a Delaware Valley Journal podcast.

“Dave is vehemently opposed to government vaccine and mask mandates and supports the rights of individuals to make decisions that best suit their unique situation. What we’re seeing in Philadelphia and elsewhere to reinstate mask mandates shows that science has been replaced by woke virtue signaling,” said David McCormick campaign spokesperson Jess Szymanski. The Republican is also running for the U.S. Senate.

“Biden promised to ‘follow the science’ back in September. But his policies smell of virtue-signaling rather than pragmatic policy-making,” said GOP Senate candidate Kathy Barnette. “We have children wearing masks on busses but not in school, families wearing them to board the plane but not during the flight, people putting on and taking off masks as they cross jurisdictions, and the government coercing private companies into maintaining mandates which have no documented relationship to health concerns.

“The bottom line is that these mandates are a means of control, not responsible health policy.  The judge is right to reject them, and the administration just can’t bear the idea that they don’t get to tell us what to do,” she said.

And Republican Dr. Mehmet Oz, who is running for the Senate, told Greg Kelly on Newsmax TV Wednesday surgical masks should be changed every few hours and worn correctly to be effective.

“I don’t think (masks) make a difference on planes…50 percent of the air on a plane comes from outside the plane. There is no COVID at 35,000 feet, and the rest of the air is purified so cleanly it’s better than being at home,” said Oz.

David Galluch, a Republican running to oust Rep. Mary Gay Scanlon (D-Delaware/Philadelphia), said, “Vaccines and natural immunity provide highly significant protection against COVID for the vast majority of Americans. The recent ruling doesn’t preclude people from wearing a mask. It simply gives Americans a choice. Those who have underlying conditions, are at risk, or are concerned about contracting COVID should continue to do what they feel is best for their health and safety after consulting a medical professional. But I believe it’s time Americans have a choice when it comes to masking.”

Walter Plotnick of Elkins Park said, “Personally, being sandwiched shoulder to shoulder with often sneezing, coughing members of the general public unmasked in recycled air is a deal-breaker for me.”

Cheltenham resident Dawn Pitts Tollett Johnston said, “I fly a lot and am thrilled that the mask mandate will be lifted. The air is not stale. It’s filtered and recirculated continuously. So yes, I am perfectly comfortable with flying. I refuse to live my life in fear.”

Meanwhile, a spokeswoman for Greyhound said masks are now optional on buses except when crossing into Canada or Mexico or disembarking in a local municipality that requires them.