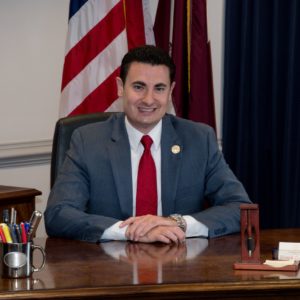 NORRISTOWN – Thursday’s Montgomery County Commissioners meeting quickly devolved into a spat when the board’s lone Republican’s comments on pro-Trump riots in Washington, DC were met with accusations of racism. It’s a charge the commission’s Democrats have been making for months.

Republican County Commissioner Joe Gale, a vocal Trump supporter, began his comments about the violence at the U.S. Capitol by stating that he has “always supported law enforcement.”

Adding that he’s praying for the nation, Gale went on to say he had been “smeared and censured” by the rest of the commissioners for his support of police “during riots in almost every major city in the country” this past summer.

“You are a racist,” responded Val Arkoosh, the commission chair and member of the Democrat majority. Arkoosh cited a memorandum sent out on Gale’s County commissioner letterhead, that she said, “left the employees of our county and the citizens of our county uncertain about where the county commission stands on the issue of race. That is the reason you were censured.”

The spat dates back to protests, and in some cases riots, that broke out across the country in the wake of George Floyd’s death at the hands of the Minneapolis police. More than 200 people were arrested after a single night of rioting in Philadelphia.

At that time, Gale used the county letterhead to say that the Black Lives Matter movement and its supporters are “radical left-wing hate groups” responsible for “urban domestic terror.” Gale stood by those statements, despite facing censure from fellow commissioners, large protests demanding that he apologize and resign, and resolutions at the state level to have him impeached.

Gale thanked Arkoosh for her comments, retorting “that is a desperate attempt to call me a racist. It was my letterhead.”

The agenda for Thursday’s meeting was focused on everyday county business such as approving contracts and reviewing budget items for the new year, but Wednesday night’s unrest in Washington— including scaling the walls and entering the Capitol building — came to the forefront in the first half-hour with Gale saying he’s always backed law enforcement and “now suddenly the media and everyone else does.”

In September, a federal lawsuit filed by eight Montgomery County residents against Gale for blocking them from his social media pages or deleting critical comments, was settled and the commissioner was banned from blocking constituents from his social media and told to pay back the roughly $600 spent by the citizens to file suit.

There are provisions under state law for legislators to impeach elected officials, but it is very rarely put to the test. The measures would need approval by both chambers of the Pennsylvania General Assembly, including two-thirds support in the Senate, and signed by the governor.