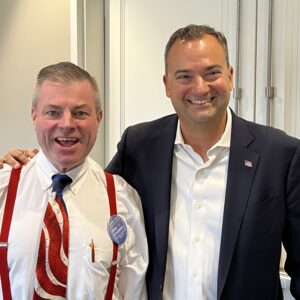 Some enthusiastic Republican candidates running for state representative and senator came to a get-out-the-vote gathering in Blue Bell on Saturday hosted by Congressional candidate Christian Nascimento.

Nascimento said he had talked so much he was getting laryngitis but added, “I’m losing my voice because I’m trying to give you yours back.”

“For too long, we’ve dealt with a Washington, D.C. that is pushing regulation, taxes, overreach on each and every one of us throughout the United States of America. I think this is the year, this is not just a red wave that’s coming. This is a red tsunami. 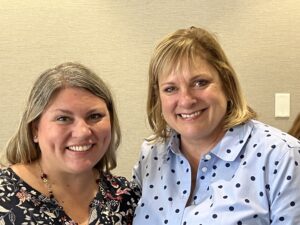 “And that is because people are sick and tired of having the far-left government reach into every crevice of their lives,” he said. “When I go out and knock on doors, when I speak to people, I ask one question, ‘Are you better off today, when you were two years ago?’ Are your streets safer? Are groceries more affordable? Is gas more expensive?”

“Volunteers are the key to this race,” said Rep. Tracy Pennycuick, who is running for the state Senate seat that is being vacated by Sen. Bob Mensch (R-Bucks/Berks/Montgomery), with his endorsement.  “You’re awesome. You’re why we’re going to win.”

His opponent is Jill Dennin, a former Boyertown Area School Board member.

“It’s about the grassroots and knocking on those 40,000 doors, meeting voters and getting a lot of blowback about why you’re a Republican and don’t want abortion and going against all the negatives…But at the end of the day, we are on the right side of his fight,” said Pennycuick. “And I know I’m on the right side because now I have a group, Democrats for Tracy. They said to me, ‘Your opponent is bat**** crazy.’ Excuse my French. And they cannot vote for her and they’re in her party. And they’re worried that if she wins, the woman who has never had a full-time job—”

“That’s what we’re facing. These crappy candidates they’re putting up with these crazy social agendas that don’t work for 99 percent of our population,” said Pennyvuick, a former Army helicopter pilot.  “If you want to be that transgender activist, that’s great. But don’t push it on my children.”

She urged people to get out to vote and bring their friends.

“And when we are veto-proof, let the games begin,” said Pennycuick.

Jessica Bradica, who is running for state representative in District 61, pointed to a Wall Street Journal article that said suburban women are turning toward Republicans. Bradica had previously run for the North Penn School Board to fight to keep schools open.

“District 61 is a seat we can flip,” said Bradica. “And we can try to have a veto-proof legislature…We have to make sure we protect our commonwealth from Josh Shapiro. He is not a moderate.”

Jennifer Sodha, who is running to represent the 53rd District, said she wants to “bring back the American spirit, where we work hard and play hard” rather than the lingering “fear and discord” from the pandemic. The Hatfield resident has knocked on 12,500 doors and “people have resonated with my platform: fiscally conservative, socially moderate.” 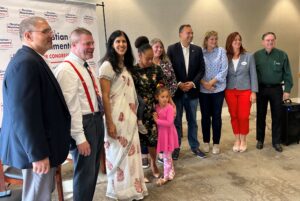 Rob Davies, who is running for state Senate in District 12, said, “Our current state Sen. Maria Collett (D-Bucks/Montgomery), is a radical progressive who really doesn’t represent the district. And she doesn’t really care about what parents think about what’s going on in the schools. She called it ‘horse****’” in the Huffington Post.

“I’m running because our economy is a mess and we have a wave of crime running through Montgomery County that doesn’t get the kind of coverage it deserves,” said Davies. “Last night in my neighborhood someone had a pumpkin thrown through their window. There were two cars stolen from my neighborhood. The gas station down the road from me was the victim of an armed robbery.”

“The number one issue is definitely the economy,” he said.  “The cost of groceries about doubled in the last few years. It’s ridiculous…There is a red wave building. You can feel it when you know on the doors.”

Fran O’Donnell, a real estate agent with a small business background, was a write-in in the primary for state representative in the 148th in Whitemarsh, Narberth, and West Conshohocken. He learned that no one was on the ballot and he said, “Wait a minute. We’re not going to show up at the playground? I got 732 votes. I was only given four days.”

Beth Ann Bitner Mazza is running for her friends, family, and community to represent the 150th district of Collegeville, Lower and Upper Providence, Skippack, and part of West Norriton.

“This is my home. My family and my friends live here,” said Mazza, a small business owner. She worked in emergency services for Montgomery County for 20 years as an EMS and decided to run because the policies of the Wolf administration have negatively impacted “all parts” of her life.