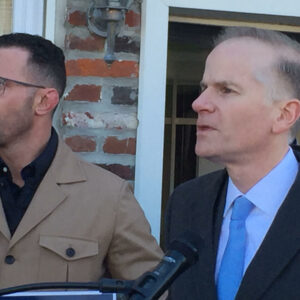 These are some of the ideas to fight crime in Philadelphia GOP gubernatorial candidate Bill McSwain pitched at a Tuesday press conference.

“I know that the law-abiding citizens of this neighborhood and throughout Philadelphia feel helpless right now,” McSwain said. “We go to work, raise our families, follow the law, and pay our taxes – only to see our streets get more dangerous, our businesses get robbed, our communities get vandalized, and our families living in fear from the criminals, drug dealers, and gangs who think they run these streets.

“I have a message for them. We run these streets. The good people, the law-abiding people, of Pennsylvania. And we are going to take them back.”

If elected, McSwain also promised to increase funding for local law enforcement and to “hunt down violent criminals by any means necessary, including the use of the State Police and the National Guard.”

“The governor should have the responsibility to appoint the chief law enforcement officer of the largest – and now, the deadliest – city in our Commonwealth. That is how we will rid the city of (DA) Larry Krasner.”

Krasner’s spokesperson did not respond to a request to comment.

During the George Floyd riots in Philadelphia in the summer of 2020, when he was the U.S. Attorney, McSwain enforced the law.

“If you start a riot, if you torch a police car, if you push an old lady to the ground, if you loot a business or burn down a building or blow up a coffee shop or an ATM, guess what? You’re going to jail.”

He detailed the case of Lore-Elisabeth Blumenthal, 34, “who proudly threw a Molotov cocktail into a police car in broad daylight right in front of City Hall and people on the far left, people who sure do not want me to be governor, they said this lady was an asset to her community. There were people actually lobbying our office lobbying me lobbying the judge to take it easy on this woman. They didn’t want her to be punished. They called her ‘a dedicated community activist.’ Well, not on my watch.”

“Now Larry Krasner and (Attorney General) Josh Shapiro, they wouldn’t have done that,” said McSwain. “They would have given her a medal. As governor, I will demand on a daily basis, that the mayor, the district attorney, the attorney general…do their jobs. And when they don’t I will force them to by using all the power of the governor’s office.” 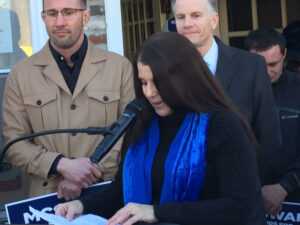 McSwain spoke at a press conference at Avenue Chiropractic in the Mayfair section of Philadelphia, where owner Ann Marie Muldoon said the neighborhood has changed for the worse since Krasner took office.

As a healthcare professional who knew “throughout this pandemic I could keep my patients safe inside but I could not keep them safe outside,” Muldoon said. “I can disinfect what’s in there but we need somebody to disinfect what’s out here.”

When she was growing up the neighborhood was like “Mayberry” and she is amazed there was a recent carjacking. Now her friends and her mother request that she text them when she gets home every night.

“Today I stand in front of you as a broken-hearted Philly girl,” she said. “Everybody has one ultimate goal at the end of the day. And that’s to get home to their family safely.”

Patty-Pat Kazlowski came to the press conference to thank McSwain for stopping a drug injection site from coming to her Port Richmond neighborhood.

Former Assistant District Attorney Carlos Vega, Krasner’s opponent in the 2021 primary, also attended the press conference. Asked afterward if he supported McSwain, Vega said that he was just gathering information and is not sure yet who he will support for governor.

The Delaware Valley Journal asked McSwain whether his proposal would take away the judges’ priority to set bail or decide to hold someone without bail.

“We’re seeing the same people commit the same crimes over and over again. The way you stop that is, the first time they’re arrested they stay in prison until they’re tried and they’re convicted and they’re sentenced,” McSwain said, adding: “What I’m saying is we could have bail reform, a legislative reform that would require pretrial detention. You would take that discretion away from judges.”

Another reporter asked about allowing voters in the rest of the state to impose their will on Philadelphia residents by voting for a constitutional amendment to allow the governor to appoint the Philadelphia DA.

“I think the vast majority of Philadelphians are very upset at the public safety crisis they’re going through right now,” said McSwain, noting that Krasner was elected “by a very small slice of the electorate. About 15 percent of the city approved of Krasner, 85 percent don’t approve.”

Asked about legislation to give the attorney general concurrent jurisdiction in Philadelphia, McSwain said that Shapiro had ignored it when it was previously the law.

“I have no reason to believe he is going to do anything with it now,” said McSwain. “That is him choosing his own political career over protecting the law-abiding citizens of Philadelphia because he doesn’t want to get cross-wise with the radical left of his party.”