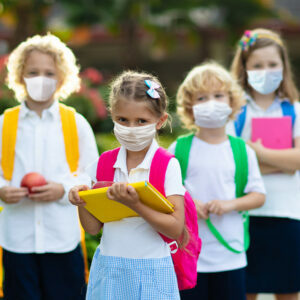 The rate of COVID-19 related illness among school kids may be low, but the tension over mask mandates for schools is running high.

In preparation for the upcoming school year, which is already underway in some places, Gov. Tom Wolf called on the state legislature to pass a mask mandate for all K-12 schools and child care facilities.

Wolf sent a letter to the Senate President Pro Tempore and the House Speaker. “Constituents, primarily parents of young children who are not able to be vaccinated are very concerned about the lack of a mask mandate in their school district.”

Currently, legislators are not set to return to Harrisburg until September 20. Wolf wants them to come back early to enact a mask mandate. His administration says he still has the power to enact a mask mandate himself, though just a few weeks ago Wolf told reporters, “I think the school districts in Pennsylvania have to decide what they want to do. I think the CDC guidelines strongly recommend that schools do that. They’re not mandating it, and neither am I.”

Still, some parents remain adamant that masks be required for all children. The problem for Wolf is voters recently reduced his ability to act unilaterally.

In May, they approved limits on Wolf’s emergency power through a referendum. Now, a simple majority of the General Assembly can end an emergency order, where previously only the governor or two-thirds of the Republican-controlled legislature could do so. What’s more, a disaster declaration can now only be made for 21 days instead of the previous 90, and it can only be extended by the legislature.

State House GOP spokesman Jason Gottesman said that the House will not be returning to Harrisburg early. Furthermore, he said mask mandates should only be done at the local level.

“We’ve been for local decision-making since the beginning of the pandemic,” Gottesman said.

On Thursday, state GOP leadership responded to Wolf’s request saying, “You and members of your administration have made it publicly known that you would not impose any additional statewide mandates and instead allow mitigation decisions to be made at a local level. Your letter today is a stark departure from that position.”

Chester County Republican Committee Chairman Dr. Gordon Eck doesn’t think there should be a mask mandate in schools at all.

“The science shows that our children are not at significant risk for COVID-19 and the masks they are wearing are ineffective in preventing or protecting from transmission of [this respiratory illness],” Eck said. “Mask wearing should be voluntary and at the discretion of the parents, not school administrators.”

Many districts in the Delaware Valley have already made similar moves. Cheltenham, Norristown, Philadelphia, Lower Marion, and Abington schools are just a few that will require masks.

While Pennsylvania debates a mask mandate,  the U.S. Department of Education is warning five states their statewide bans preventing schools from imposing mask mandates could violate students’ civil rights. The department sent officials in Iowa, Oklahoma, South Carolina, Tennessee, and Utah notifications the department’s Office for Civil Rights is investigating whether their bans are discriminatory.