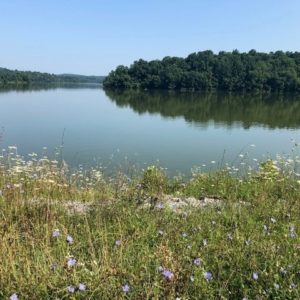 If you claim the water’s not safe then why go paddling in it… with your kids? That’s what a group of anti-pipeliners were seen doing earlier this week at Marsh Creek Lake.

An incident of drilling mud escaping a pipeline construction site and getting into Marsh Creek Lake is undoubtedly unfortunate, but an understanding of the facts proves that much of the local hysteria is quite overblown.

Inadvertent returns, which is the incident that occurred, happen when drilling mud — made up of water and non-toxic bentonite used to cool the drill — get into the cracks and fissures in the ground and escape the drill hole.

In an ideal world, this mud would be contained within the drill hole, but depending on the soils, geology and topography of certain areas some will undoubtedly escape. Because it is widely acknowledged that inadvertent returns will occur, the drilling mud is entirely made of non-harmful, naturally occurring materials.

One news story I read included a quote by someone with one of the deep-pocketed environmental groups saying that they believe there are “chemical additives” mixed in. Let me be clear, that is false and disregards the strict regulatory oversight that goes into every aspect of pipeline construction, which includes the ingredients used in drilling mud.

Environmentalists also missed the mark when they were reporting that water sources were impacted. As many of us have hopefully learned during what has been the COVID-19 pandemic, science matters and such reckless comments are good for only one thing — mass hysteria. What’s worse is that the media, in some instances, has provided the microphone to spread the false information.

The Pennsylvania Department of Environmental Protection (DEP) — which regulates the construction of this pipeline — has been on the scene and contradicted the anti-pipeliners claims, reassuring everyone that “there has been no known impact to drinking water supplies downstream,” as reported by the Heinz Foundation (anti-pipeline) funded State Impact.

These pipeline opponents have very deep pockets behind them to help fund their activities. It was recently uncovered that one of them that lost a primary for state representative has a history of being funded by out-of-state dark money.

Others have endless budgets to file countless frivolous lawsuits against the pipeline and pipeline developer, none of which have generated successful verdicts for the interests of their funders. They have also been found to use taxpayer dollars to advocate against these projects.

But the reality is, these activists operate using a playbook whose ultimate goal is to permanently halt a legally permitted project, and if not halt it, create delays that drive up costs, extend timelines and ultimately hurt consumers in the long run.

The Mariner East pipeline is very close to completion. In fact, the project is nearly complete in areas beyond the Delaware Valley. There is no doubt that this latest incident at Marsh Creek Lake is not a positive development, but no laws were broken.

The DEP has been onsite since the incident occurred to investigate and crews have been on-hand to contain, clean-up, and restore the site. In fact, just a day after their media antics, the very same pipeline activists were seen paddling with their families and friends in the lake.

The pipeline developer has followed the legal protocols and very likely will have to pay a considerable fine as a result.

Energy development, especially products like ethane and propane, which will be transported through Mariner East, are critical to the manufacture of countless items needed today to fight COVID-19 — facemasks, hospital gowns, ventilators and syringes among many others.

The vast opportunities available to Pennsylvania through energy development have thus far exceeded expectations, but aren’t possible without the safe, efficient transport of these products to market.

Today, we rely on China to manufacture much of our medical equipment, but the Delaware Valley and region as a whole could become a new manufacturing hub for these products if we make the necessary investments to develop infrastructure like Mariner East.

Bill Godsey is owner and president of Geo Logic Environmental Services and a former geologist for the Texas Railroad Commission. He wrote this for Delaware Valley Journal.