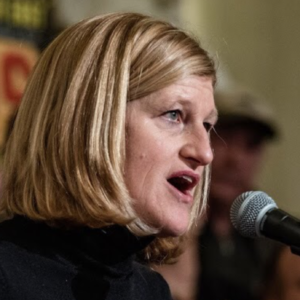 A Delaware Valley Democrat is criticizing the mail-in election process in the June primaries and even had raised the possibility of challenging her 19-point loss. In the process, critics say, she’s undermining public faith in the electoral process — a charge Democrats frequently level at President Trump.

Ginny Kerslake lost to incumbent Democrat Rep. Kristine Howard in the House District 167 primary by 1,950 votes, a 59-40 percent margin, according to unofficial results from the Secretary of State’s office.

Despite the poor performance, Kerslake and a campaign staffer, Lani Frank, have criticized the election process as unfair. Both took issue with an approximate 1,600 ballots that were mailed or sent before Election Day but weren’t received until after. Those ballots weren’t processed because only ballots received on or before Election Day are legally cast.

“My concern is that uncertainty about the result of the campaign remains,” Frank told the Daily Local. “While we understand that Ginny is currently (losing) … and the possibility of closing the gap is slim, we also joked in 2016 that (then-candidate) Carolyn Comitta had to win 80 percent of the Military/Overseas ballots (in the race for the 156th Legislative District, and that was slim to none. But she did!”

A five-day window in which Kerslake could have challenged the results closed Monday, according to county officials.

“Let me be clear, there is no reason to believe that ballots received too late to be counted would not have reflected the way the ballots received on time broke for the various candidates,” spokesman, Marty Marks said to the Daily Local. “We have seen President Trump attempt to sow seeds of doubt about the credibility of voting by mail in a thinly veiled attempt at voter suppression. Voters should not be deceived by attempts to cast doubts about the vote-by-mail process or the results of this year’s Primary Election.”

“From what we can see, voters were very clear about their preferences and the election results accurately reflected their choices,” he said.

Chester County Democratic Chairman Dick Bingham had nothing but praise for the county’s voter services division, saying it did the best it could under extremely difficult circumstances.

“I would say there’s no uncertainty about the results,” Bingham told Delaware Valley Journal. “I don’t think there’s any reason to begin to suggest there’s any possibility that they were not treated fairly.”

Kerslake is unhappy that some counties did have the ability to collect and process ballots received after Election Day thanks to a last-minute executive order from Gov. Wolf. The order applied to places like Philadelphia and Montgomery Counties, but not Chester.

Ironically, Kerlake’s complaints resonate with opponents of the progressive push to move Pennsylvania to an all-mail-in ballot state.

“This attack on the mail-in ballot system by a disgruntled candidate shows one of its fundamental flaws. Once you say ‘we’ll count ballots that come in a week late,’ why not two weeks? A month? Year-round? It’s a system designed to create disputes over election results, not resolve them,” J. Christian Adams, president and general counsel of the Public Interest Legal Foundation, told Delaware Valley Journal.

In 2019, Kerslake lost a primary race for the Chester County Board of Commissioners, coming in last in a field of four candidates and garnering only 17 percent of the vote. In both campaigns, she’s been an outspoken environmental activist supporting Green-New-Deal style policies. Her critics note that both races were funded in large part by out-of-state dark money donations leading back to the Green Advocacy Project (GAP).

Because it is a nonprofit, it does not have to disclose its donors, the main qualification to be considered dark money.

As a result, GAP is using its money to influence local races in hopes of achieving similar goals. “Unfortunately the Federal government is currently pursuing policies in the wrong direction,” reads a statement on the GAP website. “However, in many policy areas, progress is possible at the local and state level.”

The group has spent close to $200,000 on Pennsylvania elections as part of a strategy to use local races to advance its national green-energy agenda, Delaware Valley Journal has learned.

Requests for comment to the Kerslake campaign were not returned.

Rep. Kevin Boyle (D-Montgomery) said despite the complaints from the Kerslake campaign, all efforts by the legislature are underway to make the process smoother in November and as accountable and transparent as it should be.

Boyle is minority leader of the House State Government Committee, which has oversight on elections issues.

“This was a very Chester County-specific race, and I think [in light of] the new system we have as it pertains to the mail-in process, it would be appropriate to listen to ways that we can improve the process,” Boyle said. “But ultimately, I don’t believe that the system is in any way not legitimate. It can improve, but it does not take away from the fact that the process we have is legitimate.”