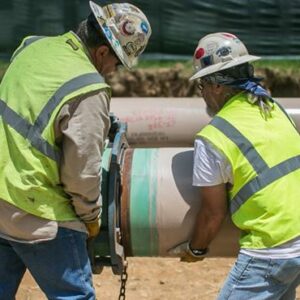 “In February 2022, construction of the final phase of the Mariner East project is complete, and commissioning is in progress which will bring our capacity to 350,000 to 375,000 barrels per day,” ET’s Co-Chief Executive Officer Tom Long announced during the company’s fourth-quarter 2021 earnings call.

“Energy Transfer’s Mariner East franchise will now include multiple pipelines across Pennsylvania connecting the prolific Marcellus/Utica Basins in the west to markets throughout the state and the broader region, including Energy Transfer’s Marcus Hook terminal on the East Coast,” Long said.

And the pipeline’s been partially operational for months. “For full-year 2021, natural gas liquids (NGL) volumes through the Mariner East system and our Marcus Hook terminal are up nearly 10 percent.”

The Dallas-based company, which operates more than 114,000 miles of pipelines across North America, reported a record amount of products through its network in 2o21, in part thanks to the Mariner East capacity already online.

The $2.5 billion, 350-mile project began in 2017, providing hundreds of jobs but also provoking political pushback from opponents of fossil fuels. While the pipeline runs across the entire state, the opposition has been particularly intense in the Delaware Valley.

Rep. Danielle Freil Otten (D-Chester County) launched her political career with a run for the state legislature on her opposition to the project. She tapped into her neighbors’ frustration with the hassles that came with construction. However, her opposition has continued even as the pipeline’s construction has drawn to a close.

As recently as last October, Friel Otten was holding press conferences calling for the shutdown of the entire pipeline project.

Workers in the energy sector, however, have a different view.

“This is the news our members have been waiting for,” said Jim Snell, business manager of the Steamfitters Local 420. “They’ve been laboring for years on this pipeline because they know even greater opportunities are possible at the Marcus Hook Industrial Complex and beyond once everything is up and running. The economic benefits of this project have been irrefutable, but the economic promise is even greater.”

The construction of the Mariner East pipelines is credited with an estimated $9.1 billion in tax revenue and economic impact to the state. It also provided thousands of union jobs.

Thomas Shepstone, a Pennsylvania-based energy consultant said, “The Mariner East project distinguishes Pennsylvania from some of its neighbors. It proves one can still do big valuable infrastructure projects in Pennsylvania; projects that produce jobs, deliver goods safely and position the Commonwealth to grow and economically develop.”

Kurt Knaus, spokesperson for the Pennsylvania Energy Infrastructure Alliance, agreed. “Residents and businesses have long awaited the Mariner East project to come to fruition. Now, with its completion, Pennsylvania will soon be able to realize the full potential of this massive investment in energy infrastructure.

“The success of this project will be felt across the state for decades to come, and our communities will continue to benefit economically and environmentally from its sustained operation,” Knaus said.