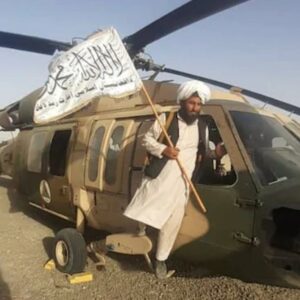 Made in the Delaware Valley, Left Behind in Afghanistan: Vets Upset As US Weapons Wind Up With Taliban

“The Chinooks are made in Ridley Park, right outside of Philadelphia,” said Pennycuick, a retired military helicopter pilot. “Our Humvees go through reset up in Tobyhanna, and our Bradley fighting vehicles are made out in York.”

That, says Pennycuick, is just the tip of the iceberg.

“There are all kinds of subcontractors that make component parts to all kinds of weapon systems in Pennsylvania.” Speaking just hours after a deadly bombing in Kabul that claimed the lives of at least 13 U.S. servicemen, she added: “I think the Taliban are waiting for September 11 and I think it’s going to get a lot worse than it was today.”

According to a report by National Defense magazine, Pennsylvania ranked 7th in the top 10 states for defense contract spending, with $15.3 billion. Defense contractors with facilities in the Delaware Valley include Lockheed Martin, Boeing, Northrop Grumman, Leidos, BAE Systems, and L3Harris.

State Rep. Francis Ryan (R-Palmyra) says he would be “stunned” if Pennsylvania-made weapons and equipment hadn’t been captured by the Taliban.

“We have some fairly large military contractors in Pennsylvania,” says Ryan, a retired U.S. Marine Corps colonel who served in Afghanistan following the 9/11 attacks. “I will tell you that the equipment left behind is pretty sophisticated stuff.”

“They now have access to our biometric data systems, which is where we can take fingerprints and identify someone,” says Pennycuick. “It is frightening that we have been so incompetent, and as the saying goes, ‘this is not a failure of soldiers, this is a failure of suits,’ meaning this is Washington, D.C.’s error.”

When an enemy combatant has our equipment, that equipment ends up becoming a weapon that can be used against us, said Ryan.

“And now, the identification of friend and foe in a combat situation becomes that much more difficult. When we first started training Afghans shortly after the 9/11 attacks, one of the projects I worked on was what style of equipment do we give them in terms of uniforms, because it’s a big deal.”

“Congressman Wilson made certain that he went to Egypt to get captured Russian equipment that could then be used so it was not identifiable as coming from the United States when we were helping to stage the effort in orchestrating the fall of the Soviet Union in Afghanistan,” says Ryan. “We now have that problem four-fold because of the amount of equipment that was left behind.”

Thomas Spoehr, a retired Army lieutenant general now serving as director of the Center for National Defense at The Heritage Foundation in Washington, D.C., said it will be a tougher fight with the Taliban today than it was in 2001.

“They have weapons now that have a longer range,” says Spoehr. “The Taliban back in 2001 was mostly equipped with AK-47s, which is the short-range assault rifle, and now they have M-16s and U.S.-made sniper rifles, U.S.-made machine guns, stuff that will probably jam less, and they have tons of ammunition.”

Pennycuick is not ruling out China or Russia acquiring the weapons and equipment.

“They’re going to have an advantage on tomorrow’s battlefield,” says Pennycuick. “It’s alarming that we would leave millions upon millions and maybe even billions of dollars of equipment that is so technologically advanced.”

“I’m not really worried about a nation-state buying this stuff, although that is possible,” says Spoehr. “I’m more worried about Taliban transferring it to a terrorist org like ISIS or Al-Qaida, just in an effort to cause additional problems for the United States.”

As for Thursday’s attacks in Kabul that killed U.S. service members and injured others, Pennycuick said those deaths were preventable.

In a puzzling press conference that had the president at times questioning reporters, President Joe Biden said Thursday the Afghanistan turmoil and tragedy is on him.

“To those who carried out this attack, as well as anyone who wishes America harm, know this: We will not forgive. We will not forget. We will hunt you down and make you pay. I will defend our interests and our people with every measure at my command,” said Biden.