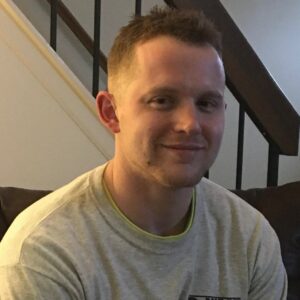 The brother of GOP lieutenant governor candidate Clarice Schillinger is among the latest victims of Philadephia’s carjacking surge.

It was still dark when Cody Burkett pulled into a parking space on 42nd Street near Pine Street at 5:30 a.m. Friday. A carpenter who is doing work at Children’s Hospital of Philadelphia, he arrived early to get a parking space for the day, he said.

With some time to spare before work, Burkett, 30, leaned his car seat back and dozed off. The next thing he knew someone was banging on the window of his 2003 Jetta.

“The guy was beating on the window, cursing at me, telling me to get out of my car,” said Burkett. “I was confused at first. I wasn’t sure what was going on. I was stunned.”

“I was scared but I was thinking it was more of a joke, but then I realized it was definitely real life,” said Burkett. “I wasn’t dreaming.”

The robber told him he had a gun and had his hand in the pocket of his sweatshirt so it appeared that he might have a weapon, although Burkett did not see a gun.

But he did get out of his car, grabbed some of his belongings, and took the key out of the ignition just as he always did. The perpetrator told him to put it back in.

Burkett said that he was “definitely” afraid.

“I was pretty shaken up,” the Horsham resident said. “I thought it was a life-or-death situation, you know, with these carjackings and robberies in the past couple of weeks have ended in fatalities. So that was in the back of my mind.”

So, Burkett got out of his Volkswagen and the carjacker drove off.

He called 911 and campus police from the University of Pennsylvania responded quickly, followed by Philadelphia police officers.

While in a police car with the officers he spotted his car, abandoned about a block away.

He was low on gas, so maybe that was why the carjacker left it, Burkett speculated. The police impounded his car to dust it for fingerprints. He expects to get it back soon.

Clarice Schillinger of Horsham is a Republican candidate for lieutenant governor and is Burkett’s sister.

“I am incredibly thankful that my brother was not harmed and for the Philadelphia police who responded immediately. Today we were lucky and I am thankful for that. Many police and victims have fallen by these senseless acts of criminals protected by radical District Attorney Larry Krasner and Attorney General Josh Shapiro. I demand action. Stop the no-cash bails. Stop putting our police in danger. Stop putting the residents of Pennsylvania in harm’s way.”

There have been a spate of carjackings in Philadelphia in recent months, including most notably of Congresswoman Mary Gay Scanlon’s car. Philadelphia police said 120 carjackings have been committed as of Jan. 26, “subject to change upon investigation.” In 2021 there were 757 carjackings in the city. And the crime has spread into the suburbs, most recently when a woman was attacked at the Willow Grove Park Mall in Abington.

“Taking back our commonwealth is critical,” Schillinger said.