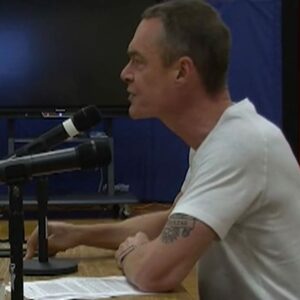 Critics of the Pennsbury School Board’s handling of COVID-19 and equity policies say they’ve been silenced by the board, and now they’re taking that complaint to court.

“This lawsuit serves as a valuable civics lesson for America’s public school students. Pennsbury’s censorship-promoting school board is not above the law. When government officials strive to silence the First Amendment rights of American citizens, those officials can be held liable in federal court,” said Campbell, who served on the Pennsbury School Board between 2009 and 2013, in a written statement.

“For years, the board’s attorneys have attempted to deny that residents have a right to speak during public comment periods. With this lawsuit, we hope to end their illegal censorship and force the board to respect our God-given and constitutional rights,” said Abrams.

“In May, Assistant Solicitor Amuso told me, ‘You’re done,’ and I told him, ‘I’ll see you in court.’ The filing of this lawsuit fulfills the promise I made to ensure that the School Board members that violated my rights are held accountable,” said Daly.

Jennifer Neill, a spokeswoman for Pennsbury, said the district had not yet been served and could not comment on the lawsuit. Lawyers Michael Clarke and Peter Amuso, the solicitors named defendants in the case, did not respond to a request for comment.

“Pennsbury officials are trampling on the First Amendment rights of parents and residents to speak their mind about their schools. They have cut off parents in the middle of sentences, yelled over critics to prevent them from being heard, edited remarks out of recordings of public meetings, and intimidated speakers by forcing them to publicly announce their home address,” said Gura, vice president for litigation with the Institute for Free Speech.

The Delaware Valley Journal had previously written about Pennsbury officials interrupting and silencing residents who tried to speak at school board meetings after a video featuring Campbell went viral. The Pennsbury School Board secretly edited criticism of the board out of a posted video of the meeting. After they were caught, they restored the video.

Meanwhile, the First Amendment lawsuit may be coming in just the nick of time to clarify the rights of people who want to speak out and criticize their local school boards and school districts. The Federalist reports that the National School Boards Association sent a letter last week asking the Biden administration to deem critics of mask mandates and creeping racial indoctrination, also known as Critical Race Theory, domestic terrorists.

On Monday, the Biden administration’s Department of Justice released a memorandum directing the FBI and U.S. attorneys’ offices to outline strategies to address what they perceive as “harassment, intimidation and threats of violence” against school board members across the country.

“It is deeply regrettable that a left-wing entity such as the National School Boards Association (NSBA) chose to attack the First Amendment to the U.S. Constitution in such an appalling way as to encourage President Biden to label school board critics as domestic terrorists,” said Campbell. “I suppose NSBA’s attitude is only to be expected given that one of its members (Pennsbury) has been attacking the First Amendment for months if not years. NSBA should hang its head in shame and apologize to the public whose tax dollars fund school boards associations.”