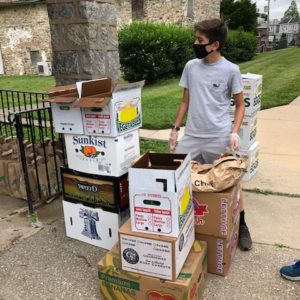 In many ways, Delaware County is an idyllic suburban landscape, home to the fourth-highest per capita, median household, and median family incomes in the state. But giving organizations can too often struggle under the weight of such surface misperceptions. After all, the county has the highest rate of poverty of the four surrounding Philadelphia — itself the poorest big city in the nation — and is home to Pennsylvania’s two most impoverished towns, Darby Borough and Chester, according to the 2016 census.

The emergencies imposed by the pandemic have forced communities in those suburban areas to dig deep and get creative to meet people’s needs as unemployment skyrocketed and food insecurity multiplied. Those hardships were especially acute in minority communities. 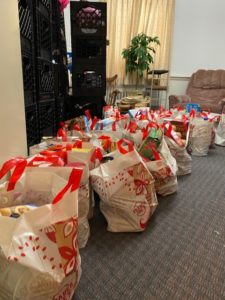 Food supplies are readied for distribution through Centro de Appoyo

During the early days of COVID-19, Centro de Apoyo Comunitario established a word-of-mouth network of food pantries for Latinos in Upper Darby Township. A small cadre of friendly-faced volunteers helped the organization’s immigrant constituency bypass institutional red tape. According to Marisabel Isel, a board member and past president of the Latina-founded nonprofit, some in the immigrant community can be wary of government help. Others are ineligible for public aid and pandemic stimulus.

Centro de Apoyo Comunitario took a collective approach to their food distribution operations in the nascent days of the virus, gathering donations for a small group of families culled from the organization’s census project.

But as more people found themselves without work due to quarantines and stay-at-home orders, leaders of the Latina-run nonprofit sought to ramp-up their services. By summer, substantial grant funding allowed the group to transform into a full-fledged food bank.

“[Now] we serve about a hundred and fifty families per event,” said Isel, who noted that a lot of the big funders are unaware that small nonprofits don’t have the budget to apply for grant money. In some ways, she said, it’s a perception problem.

“People do have a misconception about ‘oh, the suburbs are wealthy,’” she continued. “Well, not all the suburbs.”

“There’s a lot of need in Delaware County,” said Isel.

The onset of COVID-19 in Delaware County escalated the need for food banks and other food assistance networks across the region, a direct result of a still-ongoing pandemic economy. But with the renewed hopefulness of a vaccine, nonprofit and civic leaders now look to sustain long-term philanthropic giving and community awareness of hunger in a suburb where over 50,000 people struggled with food insecurity before the emergence of the novel coronavirus.

Although area food insecurity found a spotlight due to extended periods of COVID-19 joblessness, hunger has long been an issue. According to Feeding America, a national network of food banks, almost 10 percent of residents grappled with food insecurity as of 2018. Over 50 percent lived below 160 percent of the federal poverty line, making them eligible for the Supplemental Nutrition Assistance Program.

Race plays a significant factor, too, as Black families comprise over 50 percent of all those living in poverty in Delaware County. Young people of color are more likely to grow up poor than their white counterparts.

Despite those statistics, research shows that charitable giving increased throughout the coronavirus crisis. Over 50 percent of US households gave something, while 25 percent of donors increased their giving. But as winter begins to set on the pandemic, early as it may be, nonprofits will need to look toward more sustainable solutions. 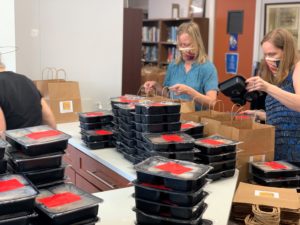 Volunteers pack meals for the Wayne Center, which received grant money from The Foundation for Delaware County

“We understand that we also have to be a part of the long-term solution toward reducing hunger, toward creating the means so that folks don’t have food security issues ongoing outside of the pandemic,” said Joanne Craig, whose nonprofit organization, The Foundation for Delaware County established a COVID-19 Response Fund within days of the first stay-at-home orders. After an initial commitment of $100,000 from its board of directors, the nonprofit began accepting grant applications to scale up projects like Centro de Apoyo Comunitario’s food pantry.

The Foundation considers its mission to enhance all Delaware County residents’ lives. Craig stated that they provide grants and philanthropic services, and public health programs focused on child and maternal health.

Craig says it’s essential to focus on the extraordinary need straining the system during the pandemic. Burdened food resource systems are a priority, she said. And while she worries about persistent, durable giving, she’s satisfied her team can do it.

“We worry because this is the business that we’re in, helping nonprofits to address and meet the needs related to the social determinants of health,” said Craig, who added that she’s confident and that her organization is one step ahead of where they need to be.

Across the nonprofit aisle, civic leaders and legislators look toward more sustainable solutions to tackle food insecurity. Delaware County Councilperson Monica Taylor told Delaware Valley Journal that along with a new food bank opening this summer, legislators take a holistic approach to the problem. According to her, Council approaches the issue from a health perspective, including instituting a Health Department and focusing on social determinants of health.

“[We’re] trying to make sure that we’re tackling [food insecurity] from the root cause and going from there,” said Taylor, who mentioned both housing and homelessness as mitigating factors. Over the past year, she’s been instrumental in organizing several food banks and drives with other legislators throughout the county. According to her, those efforts would not be possible without the help of individuals in the Human Services and Emergency Services departments, Citizen Corps volunteers, and local school districts.

“Some things have gotten sidetracked because we’ve had COVID,” she continued. “We had to respond quicker and put things forward and make large policy changes on a — probably quicker than we would have done without the pandemic, which is I guess is a little bit of a silver lining to it all.”

Brandon Dorfman is a freelance writer living in the Philadelphia area. He wrote this for Delaware Valley Journal.