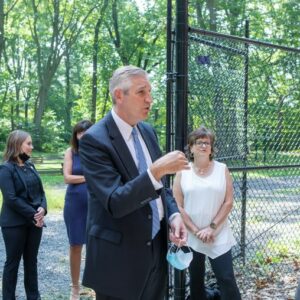 House Resolution 139 is a concurrent resolution to extend the governor’s disaster emergency declaration in response to the aftereffects of Hurricane Ida. A concurrent resolution must be passed by both the House and Senate. The bill was referred yesterday to the House Veterans Affairs and Emergency Preparedness Committee, which will meet Monday.

“The damage to the homes, schools and businesses was so extensive it will take weeks, if not months, until everyone is whole,” Labs said. “With the governor’s emergency order set to expire, it is the Legislature’s responsibility to extend it to fully allow residents and local businesses the time to assess and apply for all the financial help they are entitled to.”

“It’s clear we must extend the declaration to ensure residents and business owners can access the assistance they need to recover. Rep. Labs’ bill to extend the emergency declaration, which I am co-sponsoring, is exactly what the voters wanted when they changed the Pennsylvania Constitution,” Stephens said. “Pennsylvanians want and expect us to work together with the governor for the betterment of the people of Montgomery County and the Commonwealth.”

The vote to extend the emergency declaration is necessitated by the constitutional amendment adopted by voters earlier this year limiting a governor’s disaster declarations to a maximum of 21 days. If the governor or lawmakers wish to extend the declaration, it must be approved by a majority in the House and Senate.

Stephens joined Wolf and emergency management officials on a Sept. 3 tour of the area.

On Wednesday, Stephens hosted a tour of the House Republican Policy Committee, headed by Chairman Martin Causer (R-Cameron/McKean/Potter), to show colleagues the damage caused by an Aug. 30 tornado and flooding rains that were remnants of Hurricane Ida that hammered parts of Pennsylvania. Wolf declared a state or emergency Aug. 31.

“While many areas of the state experienced some flooding due to Ida, it was especially severe in the southeast region of the Commonwealth,” Causer said. “The area was also hit by a tornado, leaving many downed trees and buildings with their entire roofs torn off. The damage is extensive.”