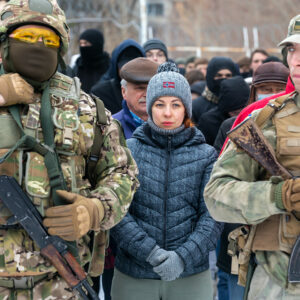 The descent of eastern Europe into war is like an excruciating movie in which you have to fear the worst.

You can’t believe that Russia’s Vladimir Putin would have marshaled all those forces within shooting distance of Ukraine without planning to use them. You know you have to accept the tragic news that people will be killing one another across a corner of the region that few of us could have spotted on a map until all TV networks began showing us where the Russians would strike.

Putin and his ministers and assorted flunkeys presented one distortion after another in what was described as a press conference in which they mouthed every rationale imaginable for going to war. The only relief came in the prospect of more dialogue as enunciated by Foreign Minister Sergei Lavrov while Putin looked on silently like a master approving the carefully rehearsed words of his loyal servants.

It would be difficult to sort out all the nonsense they were talking about, but what sticks are repeated claims that the Ukraine forces, with the blessing of the 30 NATO nations led by the U.S., have been opening artillery and rifle fire across the line in the southeastern  Donbass region. The fact that this region was part of Ukraine until a few years ago is irrelevant. Now the Russians are saying it’s divided between two “people’s republics,” Donetsk and Luhansk, which should even be recognized as independent countries.

Putin gives the appearance of a beast of prey sizing up his next dinner before pouncing. It’s hard to know why he wants to conquer a nation where millions died under the control of the former Soviet Union in the 1930s, but obviously plain and simple nationalism underlies the whole crisis.

In that sense, Putin bears comparison to Xi Jinping in China and Kim Jong-un in North Korea. Xi’s burning ambition is to recover Taiwan, the island province that remained independent after the victory of Mao Zedong’s Red Army in 1949. Kim Jong-un, of course, would like to atone for the failure of his grandfather, Kim Il-sung, to take over the south in the Korean War by uniting the Korean peninsula under his rule.

Both Xi and Kim would appear to have enough common sense not to risk wars in which millions would die. Xi cannot be sure the Americans and probably the Japanese would not rush to Taiwan’s defense, repelling his forces in the Formosa or Taiwan Straits, and Kim has to worry about the Americans, again with the backing of Japan, turning back invasion of the south. Better to test-fire missiles and fabricate nuclear devices, Kim seems to believe, than to take chances on a war in which his regime might not survive.

You have to hope Putin would also have that much common sense. The ultimate consequence of the Russian invasion of Ukraine could be a European or even another world war. The war might not reach those proportions right away, but expansion of the conflict would be likely when considering Russian ambitions.

It’s not just that the Russians piled up every pretext they could think of to cross the line into Ukraine. Bearing in mind that revenge and a return to the greatness of the Soviet Union in its finest hours would be a prime motive, Putin soon would want to recover other former satellites. They already have Belarus under dictator Alexander Lukashenko in their orbit, so much so that Russian troops have been training there above Ukraine’s northern frontier.

The Russians want more. How about Estonia, Latvia, and Lithuania? They’re ripe for the taking, on the Baltic, exposed to Russia with no other neighboring power to guarantee safety and permanent independence. Lithuania does share a brief common border with Poland, but Poland was divided between Hitler’s Germany and Stalin’s Soviet Union before those two evil tyrants went to war with one another in mid-1941. Poland, after the German surrender four years later, fell under Soviet rule.

We should look at the expansion of the Soviet Union to encompass eastern Europe, and much of Central Asia too, in terms of Russian nationalism rather than communism. Putin, by gnawing away at Ukraine, sees himself avenging the wrong of the breakup of the Soviet empire. Similarly, Kim Jong-un, as he threatens his enemies with nukes and missiles, dreams of some day leading a united Korea, avenging 35 years of Japanese colonial rule and the division of Korea by the U.S. and USSR after the Japanese surrender.