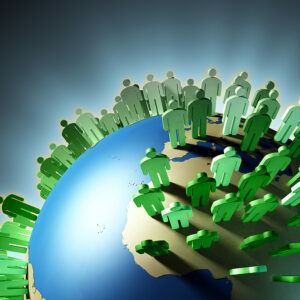 It wasn’t front and center at the climate change summit, COP26, in Glasgow, but it was whispered about informally, in the corridors, and over meals.

For politicians, it is flammable. For some religions, it is heresy. Yet it begs a hearing: the growth of the global population.

While the world struggles to decarbonize, saving it from sea level rise and the other disasters associated with climate change, there is no recognition officially anywhere that population plays a critical part.

People do things that cause climate change from burning coal to raising beef cattle. A lot of people equal a lot of pollution equals a big climate impact, obvious and incontrovertible.

In 1950, the global population was at just over 2.5 billion. This year, it is calculated at 7.9 billion. Roughly by mid-century, it is expected to increase by another 2 billion.

There is a ticking bomb, and it is us.

There was one big, failed attempt to restrict population growth: China’s one-child policy. Besides being draconian, it didn’t work well and has been abandoned.

China is awash with young men seeking nonexistent brides. While the program was in force from 1980 to 2015, girls were aborted and boys were saved. The result: A massive gender imbalance. One doubts that any country will ever, however authoritarian its rule, try that again.

There is a long history to population alarm, going back to the 18th century and Thomas Malthus, an English demographer and economist who gave birth to what is known as Malthusian theory. This states that food production won’t be able to keep up with the growth in the human population, resulting in famine and war; and the only way forward is to restrict population growth.

Malthus’s theory was very wrong in the 18th century. But it had unfortunate effects, which included a tolerance of famine in populations of European empire countries, like India. It also played a role in the Irish Great Famine of 1845-49, when some in England thought that this famine, caused by a potato blight, was the fulfillment of Malthusian theory, and inhibited efforts to help the starving Irish. Shame on England.

The idea of population outgrowing resources was reawakened in 1972 with a controversial report titled “Limits to Growth” from the Club of Rome, a global think tank.

This report led to battles over the supply of oil when the energy crisis broke the next year. The antigrowth, population-limiting side found itself in a bitter fight with the technologists who believed that technology would save the day. It did. More energy came to market, oil resources were discovered worldwide, including in the previously unexplored Southern Hemisphere.

Since that limits-to-growth debate, the world population has increased inexorably. Now, if growth is the problem, the problem needs to be examined more urgently. I think 2022 is the year that the examination will begin.

Clearly, no country will wish to go down the failed Chinese one-child policy, and anyway, only authoritarian governments could contemplate it. Free people in democratic countries don’t handle dictates well: Take, for example, the difficulty of enforcing mask-wearing in the time of the COVID pandemic in the United States, Germany, Britain, France, and elsewhere.

If we are going to talk of a leveling off world population we have to look elsewhere, away from dictates to other subtler pressures.

There is a solution, and the challenge to the world is whether we can get there fast enough.

That solution is prosperity. When people move into the middle class, they tend to have fewer children. So much so that the traditional populations are in decline in the United States, Japan, and in much of Europe — even in nominally Roman Catholic France. The data is skewed by immigration in all those countries — except Japan, where it is particularly stark. It shows population stability can happen without dictatorial social engineering.

In the United States, the not-so-secret weapon may be no more than the excessive cost of college.