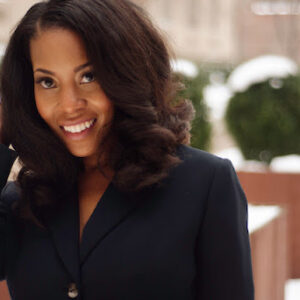 John F. Kennedy once said, “Let us not seek the Republican answer or the Democratic answer, but the right answer.” Kearni Warren believes she is the ‘right answer’ for Chester as the Green Party nominee for Chester City Council.

Warren is making history as the first minor party candidate to run against the Democratic and Republican parties in a Chester City Council race.

Born and raised in Chester, Warren hopes to make a difference for the people of her community by running with the slogan: People. Power. Purpose.

“I come from very humble beginnings,” she said. “I grew up in a home with my grandmother, my two aunts, and my mother. Throughout my life, I traveled to different places. I lived in a couple of different places for college, and then I came back home. I’ve been a caregiver for the past 20 years. A family caregiver, caring for my mother, two grandmothers, and a grandfather. I realized this being my home I wanted to make a difference.”

“My activism consists of environmental justice,” she said. “Fighting the Covanta’s incinerator that’s located here in Chester. Covanta’s incinerators burn trash. Most of them are located in predominantly Black and Brown lower-income communities, such as Chester. The trash burning causes a lot of pollution. Air pollution leads to major health issues and death. Chester has a very high rate of infant mortality, asthma, and cancer.”

However, not everyone agrees that the Covanta plant is a problem. Chester Mayor Thaddeus Kirkland, who is Black, supports the plant, which pays the city some $8 million annually in taxes and fees and now publishes its emissions data on its website. He has also taken residents on tours of the plant, which tends to change their perceptions. Kirkland claimed most of the air pollution in Chester is from emissions from vehicles on surrounding highways.

Warren began her run for City Council in June. After the success of political outsider and blogger Stefan Roots, a Democrat, beating the incumbent in the primary in May, Warren received an email asking if she’d ever considered running for City Council. It’s a task that proved more difficult than you might think.

“It’s difficult to further yourself in politics if you’re not a part of the major two-party system,” Warren said. “So because of that, I felt like I was in the wilderness trying to figure out how to even start the process of getting signatures to get on the ballot. There was not a lot of information.”

However, it’s not the party that matters to Warren. It’s about the people and how she can help make their lives better.

“Many of the residents hadn’t heard of a Green Party and they didn’t have a problem with it. They liked who I was from me talking to them, understanding I’m a resident, my background in activism, who my mother (the Rev. Bernice Warren) was in this city. She was a powerful woman in this city. She fought for the rights of Chester residents and the children. And so that rang with them. Not a party.”

While the Green Party isn’t one many are familiar with, Warren isn’t worried.

Warren wants to focus on the services and opportunities Chester has to offer by bringing in new businesses.

“I don’t like the fact that there isn’t a major grocery store here,” Warren said. “It’s hard to access quality food. And many say ‘Well, we have food giveaways and food pantries and things like that.’ That’s correct, we do. But I wanted to reframe and reclaim Chester City. I no longer want to feel like we’re constantly being given stuff. We want to be self-sufficient. We don’t want to have to continuously go to a food give-out or food giveaway. We want to have our own grocery stores.”

Warren has a long road ahead of her as she campaigns for the city council, but she’s in high spirits.

“It is time to reclaim and reframe Chester,” she said. “We walk the same streets that MLK did. We share the same activism, fire, and spirit because we know what greatness comes out of Chester. From the arts to business, Chester has some of the most amazing potential. I’m proud to say I’m Chester Made. And this is what I live and fight for. This is my passion, the community. You are my passion.”

“I tell people this is bigger than me. This run is not of me. I had a different idea of what I wanted to do, but again, if not me, then who?” she asked.