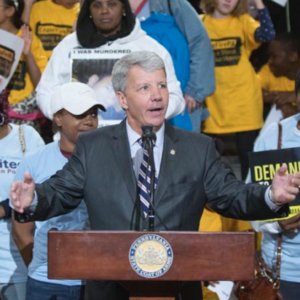 This article is part of a DVJ series on key races in the Delaware Valley.

GOP State Sen. Tom Killion has been in Harrisburg for 17 years and is no stranger to pulling off wins when the going gets tough. But this year’s race to keep his seat might be his toughest yet.

Killion represents Pennsylvania Senate District 9, encompassing portions of Delaware and Chester counties. In 2016, he won by almost three points even as President Trump was losing the district by almost 13. Now, he’s a target for state Democrats eager to flip the state Senate.

Killion says he’s running again because he still has work to do.

“I have several pieces of legislation that I would like to see get across,” Killion told Delaware Valley Journal. He listed bills on affordable housing, reducing prescription drug costs and DUI laws, among others.

Steve Warhola, Kane’s campaign manager, told DVJ that Kane got into this race because of personal reasons. “John is a cancer survivor, so he knows how important affordable quality healthcare is… Hundreds of thousands in PA are out of work. John himself can look them in the face and say, ‘I was out of work for three years.’”

But Killion has his doubts about Kane’s viability. “I don’t know of a single thing he’s done for this community… I have a record, it’s one that matches the district. He has no record.”

Killion is banking on his record.

“People know me. Not so much as a politician, but as a community person.” He described work he’s done on local nonprofit boards and aiding hyperlocal projects. “That cuts across party lines.”

Thanks to his center-right record and endorsements from unexpected organizations — like the gun control group Moms Demand Action — Killion is often called a moderate. But the Kane campaign disagrees.

“He’s a Trump Republican,” Warhola said of Killion. “His first vote he casts is for climate denying, anti-worker, pro-pollution leadership… The only time he does take a more moderate stance is all for show.”

Linking Killion to Trump can pay dividends for Kane, as polls show Trump is unpopular in the Philly suburbs.

“[Killion] has done everything right,” said PA GOP Strategist Charlie Gerow. “But ultimately, the outcome of his election may turn on the national campaign rather than his own efforts.”

But Killion doesn’t seem worried about the top of the ticket. “I’m in a much better position than I was four years ago,” he said.

“I was a new guy,” he said, because his previous service was in a smaller house district. “My name ID was barely on the charts in Chester County. Now it is fairly high.”

He added polling shows Trump at his 2016 levels in the district, suggesting Killion may again be able to replicate his narrow win.

Both campaigns noted the loss of straight-ticket voting would impact the race. Killion said it gives him an advantage.

“This year, it is more incumbent upon campaigns to get voters to vote down the ballot,” said Warhola. He believes that puts the Kane campaign in good shape.

Vanessa Clifford, political director at the PA Working Families Party, says she’s pleased with the Kane campaign’s organizing moves. “Although we did not endorse John in the primary… [we] are very happy with how the Kane campaign has been doing. There has been a really strong campaign infrastructure since the beginning of the race.”

But COVID-19 has changed campaigning — while they still have some in-person events, the focus has been on contacting voters virtually.

Killion said his team adopted quickly to virtual campaigning and believes it’s provided new opportunities. “I’ve had more meetings with groups this campaign than previous campaigns.” Thanks to Zoom fundraisers, his “fundraising is doing better than four years ago.”

GOP strategist Gerow described how “Killion’s leadership and seniority in the Senate have a tremendous advantage for the people” of SD-9. He added Killion’s voice is important in the GOP caucus as there aren’t that many members left in southeast PA.

Killion echoed that idea. He described close relationships with leadership of both chambers and how that makes him able to get more done for the district. “You don’t come through the door and be able to do those kinds of things.”

With votes already being cast in the Delaware Valley, both campaigns feel confident about their chances.

“We’re feeling good,” said Warhola. “We just know we have to run through the finish line. Hopefully, in three or four weeks, we’ll feel really good about the work we’ve done.”

“I have an advantage,” stated Killion. “We’re going to have fun over the next 22 days, and I plan on winning once the numbers are counted.”