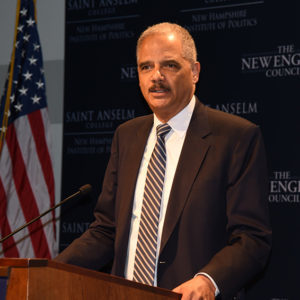 Democrats didn’t want to just end the Trump presidency in 2020. They also planned to undo what they saw as the unfortunate consequences of the Obama era as well: Their devastating losses in America’s state legislatures.

The 2020 election offered Democrats the opportunity to reverse that: An unpopular Republican in the White House, a COVID-shaken economy and a massive fundraising advantage.

Despite Biden carrying Georgia, Minnesota, New Hampshire, Pennsylvania, Virginia and Wisconsin, Democrats failed to flip a single legislative body in these states. In fact, they lost control of both the New Hampshire House and Senate.

In Pennsylvania, NDRC gave $175,000 to the Democrats’ House campaign and another $150,000 on the Senate side. Holder’s group donated more than $214,000 (including in-kind donations) directly to candidates he thought might help create a Democratic chamber flip, but those never materialized.

Perhaps Holder’s most devastating failure was in Texas where high hopes of turning the state blue were dashed so thoroughly that it may be hard for Democrats to persuade donors to contribute to similar efforts in the future.

“Texas was a big success for us this cycle,” says Edith Jorge-Tunon, political director of the Republican State Leadership Committee. She says Democrats “had what they thought was a path” by focusing on state legislative districts held by Republicans but carried by Beto O’Rourke in the 2018 U.S. Senate race.

Democrats needed to win nine seats to flip the Texas House and become the majority. Instead, they picked up one seat, but lost another — a net gain of zero.  The Republican State Leadership Committee estimates Democrats spent about half a billion dollars in the effort.

“If I was an investor, I would certainly be asking for my money back,” said Jorge-Tunon.

Texas is still firmly in Republican hands, with a Republican governor, attorney general and Legislature that is 83-67 Republican — giving the GOP a free hand in redistricting in 2021, helping them hold on to congressional seats in the state over the next decade.

In New Hampshire, things went even worse for Holder’s group. In 2018, they took credit for helping flip the state Legislature to Democrat control. Two years later, both the House and Senate flipped back to Republican control, and the Republicans also gained the majority on the Executive Council, which acts as a check on the governor.

Republicans now have a “trifecta” in the state — the governor’s office and both houses of the Legislature, with a majority on the Executive Council to boot.

If anything, Democratic efforts to pick up legislative seats are going backward. After the 2010 election, Republicans held both legislative chambers in 25 states. Today, it’s 30 states, with Democrats holding both houses in only 18 states. And Republicans now have a trifecta in 23 states, two more than they did before Nov. 3 (adding New Hampshire and the Montana governor’s office), while Democrats have a trifecta in 15.

This puts Republicans in a position to draw twice as many congressional districts as Democrats in 2021, making it much easier to take control of the House of Representatives.

That’s certainly not the 2020 Eric Holder had planned.