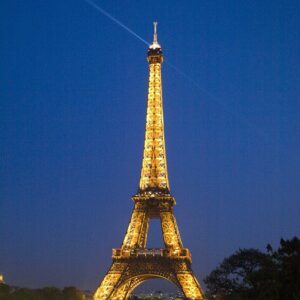 HOLY COW! HISTORY: The Man Who Sold the Eiffel Tower

But in the 1920s and 30s, one scam artist was so brazen he actually sold Paris’ beloved Eiffel Tower—not once, but twice. He stole money from a notorious gangster and made lawmen snatch out their hair in frustration.

Born in the old Austro-Hungarian Empire, Lustig was unusually bright, exceptionally charming, and spoke several languages. A better life beckoned beyond his little village, and he set off to find it.

His criminal career started with crossing the Atlantic on luxury liners after World War I. He dressed like a GQ model, displayed impeccable manners, and was smooth as silk. He made friends easily and soon was on good terms with the richest passengers.

Asked the source of his wealth, Lustig confided a secret: He had a “money box” that printed $100 bills. Intrigued, his victims always begged to see it. Amid great secrecy, he eventually showed a wooden box supposedly containing a complex contraption with rollers and printing plates that, fueled by radium, printed perfect C Notes. The only problem, Lustig lamented, was the time. It took six hours to print a single bill. He would twist a few knobs and buttons, turn off the lights and lock the room. When they returned, a crisp $100 bill was coming out of the machine. They came back again six hours after that just as another fresh hundred was emerging.

By that point, dupes were begging him to sell them the machine, which he always did with great reluctance. Each money box fetched between $10,000 and $30,000. One reportedly brought $47,000. By the time Lustig was safely off the ship, the buyer discovered the box only produced blank paper after it had dispensed the two authentic $100 bills Lustig had loaded into it.

He needed a lot of money because in 1919 Lustig married an innocent Kansas girl and started a family. He also began a long-term affair with a millionaire madame in New York named Billie Mae Scheible. (More on her later.)

In 1925, Lustig went big. He moved to Paris and began his boldest scheme yet: Selling the Eiffel Tower. It wasn’t as absurd then as it sounds today.

Built for the 1889 Paris Exposition, the tower was only intended to stand for 20 years. When Lustig showed up in the City of Light it was 36 years old and a rusting eyesore. Incredible as it sounds now, a sizable number of Parisians wanted it gone.

Lustig had official-looking stationary printed identifying him as Deputy Director of the Ministre de Postes et Telegraphes. He sent letters to six leading scrap metal dealers, inviting them to a hush-hush meeting to discuss removing the landmark. Absolute secrecy was critical, he insisted, to avoid a public uproar.

When “Count” Lustig pulled a scam (the “count” title was as genuine as his money boxes), it was a 5-star operation all the way. He got a suite in the elegant Hotel de Crillon and met the dealers there. Then they all went by limo on an inspection tour of the tower. Back at the hotel, he invited them to submit sealed bids the next day.

One dealer was especially eager to win the contract. Andre Poisson asked for a private meeting with Lustig. He explained he was new to Paris and didn’t have the insider connections the other dealers had. Lustig said he understood; he also lamented that as a government bureaucrat he was having trouble making ends meet. (Wink wink.)

Poisson took the hint. He paid the equivalent of $20,000 to purchase the tower and another $50,000 to guarantee his bid would win.

Lusting was on a train speeding to Vienna within an hour with $70,000 in cash (worth $1.1 million today). Incidentally, when Poisson realized he’d been conned, he was too humiliated to call the cops.

Now here’s the most amazing part of all: A month later, Lustig was back in Paris pulling the very same scam.

But it didn’t go well this time. When Lustig sent letters to six more scrap dealers, one smelled a rat and alerted the police. Lustig got wind of it and was on an ocean liner for America when officers showed up at his hotel.

Armed with 47 aliases and dozens of fake passports and IDs, Lustig charmed his way from one con job to another.

He wound up in Chicago where he had the chutzpa to hustle Scarface himself. He told Al Capone he had a great stock deal. (This was the Roaring Twenties, remember, when Wall Street was red hot.) But he needed $50,000 to finance it. Lustig promised to double the gangster’s money in two months. Exactly 60 days later he sadly returned all $50,000, telling Big Al the deal had fallen through. Impressed with his “honesty,” Capone gave Lustig another $5,000 to invest, which Lustig pocketed as he hurried out of town.

He was arrested more than 40 times and either beat the rap in court or slipped out of his cell. In 1930, he partnered with a chemist and fellow con man named Tom Shaw. They soon were producing $100,000 a month in excellent counterfeit bills. The Secret Service couldn’t discover who was floating all that phony money.

Their break came in 1935, courtesy of the green-eyed monster.

Lustig was still carrying on his affair with high-priced madame Billie Mae. Until he put the moves on Shaw’s mistress, who promptly told Billie Mae. The enraged madame went to the police and spilled the beans.

Now that the Feds knew who they were looking for, it was just a matter of time. When they finally caught him on a New York sidewalk, Lustig’s wallet held a hidden key; it opened a subway station locker stuffed with $51,000 in bogus bills and the plates that had printed them.

Alcatraz was the next stop for this remarkable criminal, where he was sentenced to 20 years. In early 1949 he contracted pneumonia and died in a prison hospital.

In a final irony, Lustig’s death certificate listed his occupation as “apprentice salesman.” Some apprentice! Victor Lustig knew more ways to get people to part with their money than Steve Jobs, Zig Ziglar, and other great salesmen ever learned.

It’s just a shame he used all that charm and skill for selfish gain.