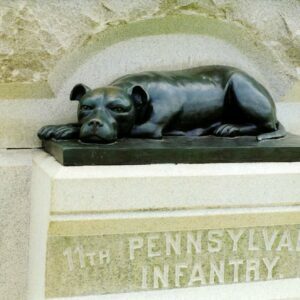 The soldiers breathed a huge sigh of relief. Sallie was safe and unharmed. Slightly dazed and numb, even traumatized. But who wasn’t traumatized at that moment? After all, they had just come through the bloodiest battle ever fought in the western hemisphere.

Sallie wasn’t a combatant. She didn’t carry a gun or wear a uniform. Yet when the fighting was ferocious, West Chester-born Sallie was right there on the battlefield. When things grew grim, she didn’t turn tail and run. Instead, she displayed a heroic dedication deeper than some of the bravest of soldiers. At last, she was reunited with the people who meant the world to her.

All that was off in the future one morning in May 1861 when she first met the boys of the 11th Pennsylvania Volunteer Infantry during the Civil War’s earliest days. The regiment was training at the fairgrounds in West Chester. A local resident showed up bearing a special gift for the troops. As Colonel Richard Coulter later recalled, “It was a brindle bull terrier puppy of a fine breed” who “showed marks of her blood.”

It was love at first sight. The soldiers were crazy about the puppy, and she was equally infatuated with them. They christened her Sallie Ann Jarrett, the first two names being inspired by a young lady the men admired, and the last name coming from the unit’s first commander Phaon Jarrett.

Soon, she was just Sallie.

When the 11th went to the front, Sallie went with them. She was no fireside mascot. Sallie accompanied the infantrymen on their drills, marched with them in parades (passing twice before Abraham Lincoln), and becoming such a prominent personality, the regiment gained the nickname “Dick Coulter’s Dog.”

She was also on the frontlines in the thick of the fighting, barking at the enemy like crazy as muskets and cannons roared around her on some of the bloodiest battlefields in American history: Second Bull Run, Antietam, Fredericksburg, and Chancellorsville.

Sallie made the long march back to Pennsylvania as Robert E. Lee’s troops headed there in the summer of 1863. She was with her boys on the morning of July 1 as a wall of gray swept out of the hills and shattered the Union lines. As the regiment retreated toward the town and on to Cemetery Ridge, Sallie became lost. The men fretted she had been killed. When Lee’s battered army finally retreated a few days later, the 11th hurried back to Oak Ridge where they had last seen her amid the smoke and confusion of battle.

And that’s where they found her, standing guard over their wounded comrades still bleeding on the ground in the brutal summer heat. The battle had ebbed and flowed, men from both sides and come and gone, but Sallie’s devotion never faltered. There was a happy reunion in camp that night.

Sallie soldiered on from there. She was wounded in the neck at The Wilderness the following year and quickly recovered. She wasn’t so fortunate the next time.

At the Battle of Harper’s Run, Virginia, just 60 days before the war’s end, she was hit by a bullet and killed. Soldiers cried like babies while under heavy enemy fire and at great risk to themselves they dug Sallie’s grave and left her where she fell.

Years passed. As the veterans grew older, they raised money to build a memorial to their military service. They were in their 50s and 60s when it was dedicated in 1890. More than a few tears were shed at the unveiling.

There are 1,328 monuments at Gettysburg National Military Park. But only one features a life-size likeness of a dog curled up at its base, still looking out for the men she loved.