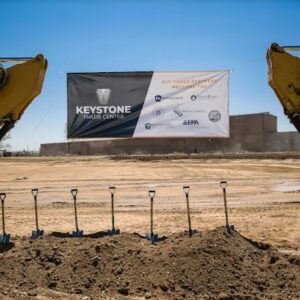 Like a Phoenix, the U.S. Steel Fairless Works site that closed its doors and left thousands of workers in the lurch in 2001 will have a new use.

On Thursday, chilly wind and blowing dust did not deter the groundbreaking for a $1.5 billion project for the new Keystone Trade Center to be built in Falls Township by NorthPoint.

At the 1,800-acre property, NorthPoint plans to build 15 million square feet of warehouse and light industrial use buildings, said Eric Yovanovick, project manager. He expects the first building to be completed by the end of the year, with 19 more structures to follow. 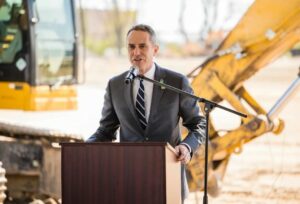 “The economic return on this is going to be tremendous for the town, the county, and the school district, as well,” said Santarsiero (D-Bucks). “Ultimately, when this is up and running, and it’s employing about 10,000 people, that’s an economic boom for the entire region.”

“We all had to come together to approve this extension of the Opportunity Zone so they could get the tax abatement,” said TR Kennan, president of the Pennsbury School Board. “But the community benefits.”

And even though NorthPoint’s new Keystone Trade Center will not be paying taxes, it will pay $500,000 to the school district each year for 15 years, plus an additional $110,000 in payments in lieu of taxes each year, said Kennan.

“It’s a win-win for everybody,” he said. “They’ll bring jobs,” and those employees will pay taxes.

Michael said he met so many people during his time in the area who either worked at the steel plant or had relatives who did.

“It’s amazing how much the site is part of the community,“ Michael said. “A brownfield development like this is certainly a heavy lift.” But, he added, “many people have applied their expertise to put the site back into productive use. We’re working to bring back the site’s rich history.”

He thanked the government officials and the consultants who have worked to make the deal happen. NorthPoint purchased the property in 2020 and it was “a major transaction for all parties involved.”

When it is completed, it will be “the largest Class A industrial development on the East Coast,” he said. When they first approached the community, “we were met with a certain level of skepticism.” But they won over their critics.

“Capital goes where capital is welcome,” he said.

“Location, location, location really does mean something,” said Harvie. He noted that 80 years ago, the land was alfalfa fields, then the largest steel mill in the nation was built there that offered “good jobs” and helped to build Lower Bucks County.

But the area is a prime location, located between Philadelphia and New York with easy access to I-95 and other highways, he said. The new development will offer thousands of construction jobs and then thousands of permanent jobs.

“We’ve got one of the largest e-commerce- sites in the states,” said Harvie, adding he had once been a Falls Township supervisor.

“Having a willing partner owning this site makes a tremendous amount of difference,” Harvie said. 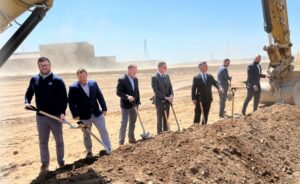 State Rep. John Galloway (D-Levittown) said the development “has been a collaborative effort between many people,” both Democrats and Republicans.

“I was born in Levittown 62 years ago,” he said. “My brothers worked in the steel mill. This was the center of our whole world. This was the economic driver of the lower end (of Bucks County).”

But when it closed, things became very difficult for people because jobs disappeared.

“I want to thank NorthPoint for more than just creating 10,000 jobs,” said Galloway. “The ceremonial digging of this dirt represents the rebirth of the lower end (and) the hope of the people who, for a long time, had no hope at all,” he said.

Northpoint, a St. Louis, Missouri-based corporation, has raised more than $9.5 billion since 2002, developed and managed more than 126 million square feet of industrial space, and created more than 65,000 jobs with 423 industrial partners around the country, officials said.

NorthPoint Development started out as a privately held commercial real estate developer specializing in industrial and multi-family development. Since then, NorthPoint has grown to 10 companies, emphasizing a factory-to-front-door model, officials said.

The corporation also touts its “Beyond the Contract,” philosophy which embodies the concept that no contract can be written to reflect everything that will occur in a complex real estate transaction.

“Our approach in all business relationships is to be fair and operate by the ‘Golden Rule,’” officials said.