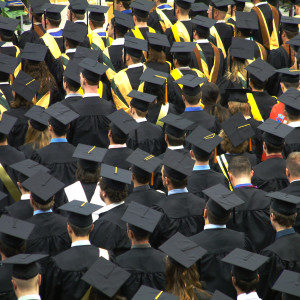 university graduates in full dress at their ceremony.
[IS] Opinions

Graduates: Go For More Than the Nine Seconds of Recognition

Posted to Education May 29, 2020 by Stephen Gambescia

No matter how many high school and college graduations I have attended, the thrill persists. Two songs always bring chills to my spine —”The Star Spangled Banner” and “Pomp and Circumstance.”

While school officials, parents, friends and family stage alternative ceremonies and celebrations for their graduates, there is no real substitute for experiencing the endless stream of pride-filled young adults marching into an auditorium, followed by their mentors.

The crammed, and usually uncomfortable, family members and friends gawk to get a first look at their graduate—one more beautiful or handsome than the next. The sight of a class in their caps and gowns looking up at the dais in anticipation is extraordinary.

After the students file to their places and without a break, the spectacle of the faculty marches past family, friends, and graduates. They are wearing their academic uniforms of medieval black robes mainly, and some are curiously donned in colors.

Each part of their regalia reveals the distinguished university they attended, what they studied, and their highest degree earned. Truth be told, the faculty participate with a range of enthusiasm. Some are exhausted from pulling their own all-nighters to mark exams so graduates can “walk” on this special day.

Then, there are faculty members wearing academic regalia for the first time and experiencing their first graduation ceremony from the dais. Some dread sitting through a protracted set of speeches and for others, they’ve been to so many graduations that the event is perfunctory. While others are there on the dais feeling an appreciation for the opportunity to bring these and other graduates through, to a commencement.

The ceremony begins. After the color guards post the colors for God, country, and the academy, we are treated with hearing a homegrown rendition of the Star Spangled Banner.

The minister (or other religious leader) gives thanks and bestows blessings on this “next generation” letting them know how much we are counting on them. The president then gives a short greeting and recognizes board members and the guest speaker.

He or she congratulates the graduates and thanks all those who have supported the class through their challenging journey. For the first time in their four or more years, students may see the Provost, the chief academic officer, who introduces one or two guests who are to receive an honorary degree for something they did to improve the human condition.

One or two representatives of the class deliver what has to be one of the most unnerving speeches that one can give in a lifetime. Regardless of what is said or the podium presence of the speakers, the class erupts at the end of their speeches, as years of work is summed up in one electrifying moment with “Congratulations Class of 2020!”

Now the moment they’ve been waiting for. They have earned a degree with all its rights and privileges. They are called up one at a time to be recognized. Each prays that his or her name will be pronounced properly — it’s the least they can do. Students begin their journey — up onto the dais and across the stage.

The faculty are filled with pride. While they’ve touched these graduates for only a short stint in their lifetime, they know they have made an impression, even if in a small way.

For the graduates of the Class of 2020, we know our make-shift ceremonies will leave a gap. While in the “real” graduation you get only nine seconds of total recognition, we entreat you to go out with your degree and do something remarkable.

Who knows, you may be back on stage one day for more than nine seconds to be honored for improving the human condition.

May the Wind be at you back!

Stephen F. Gambescia is professor of health services administration at Drexel University in Philadelphia. He wrote this for InsideSources.com.