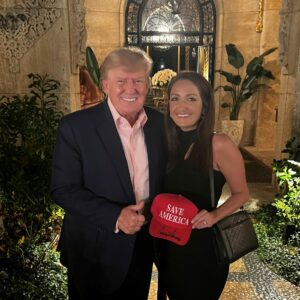 Republican Lt. Gov. candidate Clarice Schillinger just got back from Mar-a-Lago where she met with former President Donald Trump.

“It was truly fantastic,” Schillinger, a Horsham resident, told Delaware Valley Journal. She was having dinner with a friend who belongs to the club, and Trump came over to her table to say hello.

“I spoke with the former president at length on the importance of Pennsylvania and the races here, how important it was to stop Josh Shapiro. How he will be a national problem at some point because this race is a stepping stone for him to becoming president.”

Attorney General Josh Shapiro is the only major Democratic candidate in the race.

Schillinger said Trump is following Pennsylvania politics closely. He told her he will be endorsing a candidate for governor, but he has not yet made up his mind.

“He’s obviously sharp as ever,” said Schillinger. “He’s saddened at the state of our country and I shared with him just how much a mess our commonwealth is in. But I’m so optimistic we’re going to win and take it back this year.”

Trump is “just a regular guy,” she added. “I’ve always thought maybe he’d be pompous or full of himself but he wasn’t. He really wasn’t. It was very refreshing.” 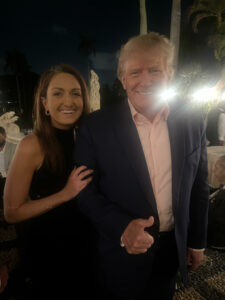 Trump sits with an iPad and “looks up everything,” said Schillinger. She talked to him about her background supporting school board candidates who promised to end pandemic lockdowns and helping them win, first with the Keeping Kids in School PAC and then the statewide Back to School PA PAC. Keeping Kids in School had a 98 percent success rate and the Back to School PA candidates had a 60 percent success rate.

“He said, ‘Don’t stop.’ And we talked about how the moms are upset and how we’re going to save America. And the grandmoms and the caregivers, all of us. When you touch our children, it’s about the future of democracy. This is what happens,” Schillnger said.

“Let me tell you, (Trump) is well-rested and sharp as a tack. He is ready to take it back.”

And Schillinger said the two made a connection over a classic movie.

“The former president even referred to a line from ‘Silence of the Lambs’ and told me that he would never forget my name.” The main character, played by Jodie Foster, is FBI agent Clarice Starling.

Referencing one of the movie’s most famous lines, the former president asked, “Would you like a glass of Chianti and fava beans?”

“I told him that Jodie Foster was extremely intelligent and beautiful,” Schillinger said. “It was truly fantastic.

Schillinger recently received the endorsement of the Montgomery County GOP,  along with the Bucks County Republican Committee and the Northumberland County Republicans. She recently came in first in the Pennsylvania Leadership straw poll and won the state’s overall straw poll.