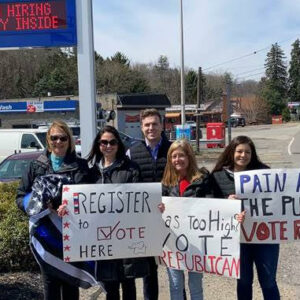 Republicans are trying to parley rising gasoline prices into new voter registrations as the midterm elections approach, and they are going straight to the pumps to do it.

Both here in the Delaware Valley and around the state, volunteers have taken their voter contact efforts to gas stations to entice disgruntled drivers to switch parties and register as newly minted Republicans.

“Disappointed families and workers are flipping their registration, as well as registering for the first time, thanks to pain at the pump brought on by the Biden gas hike,” said RNC spokeswoman Rachel Lee. “Pennsylvanians cannot afford more of Joe Biden’s costly war on American energy. As Keystone State families and workers suffer from the Biden Gas Hike, Republicans are registering voters in a mounting red wave ahead of November.”

Republicans reject the Democrats’ claims that rising gas prices are “Putin’s price hike,” as President Biden has put it.

“Before Russia invaded Ukraine, the average cost for a gallon of gas had already risen by $1.14 since Joe Biden became president,” she said. “The average American household could spend up to an additional $2,000 on gas this year because of the Biden Gas Hike.”

One of the volunteers is Bucks County resident Kim Bedillion, president of the Pennridge Area Republican Club.

“Trips to fill up the tank are causing hardships like never before, and as we are talking to voters at gas stations, we’re hearing that from people of all backgrounds. Republicans’ success in registering voters at gas stations shows just how fed up Pennsylvanians are with the Biden gas hike,” said Bedillion.

The Philadelphia GOP is also actively registering voters as the May 17 primary approaches. The final day to register to vote in the primary is May 2. 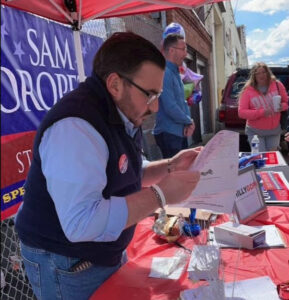 Shamus O’Donnell registers voters at an event for Sam Oropezo, who is running for the state Senate in Philadelphia District 5.

Its message is, “Streets that everyone feels safe to walk, in every community — meaning not just in elite progressive neighborhoods; providing the tools to everyday Philadelphians to lift themselves up and thrive both economically and socially.

“The freedom for families to choose where to send our children to school, and necessary improvements to our city’s schools — focusing on basic reading and math, not radical curriculum.”

Meanwhile, in Cheltenham, yard signs are springing up all over the township inviting people to join the Cheltenham Township Republican Organization (CTRO).

While registration shows 20,000 Democrats to fewer than 4,000 Republicans, CTRO Chair Myron Goldman hopes to bring more voters into the fold.

“Cheltenham is, in effect, a one-party township, but there is a functioning Republican organization,” he said. The Republicans field candidates and serve as watchdogs over the commissioners and school board.

“We regularly run voting registration drives at various locations in the county and also contact new move-ins to have them register Republican,” said Julia Vahey, executive director of the Montgomery County Republicans.

Felice Fein, vice-chair of the Chester County Republicans said, “The Pennsylvania GOP regional director, John Gavin, and his team are doing an organized voter registration drive throughout Chester County. They do occasional events everywhere from gas stations to restaurants. Currently, they and the Republican Committee of Chester County are focusing on people who recently moved into Chester County and encouraging them to register in time to have their voices heard in the primary election. The Pennsylvania GOP team and the county committee members are knocking on doors and providing voter registration forms as well as mail-in ballot applications if the residents are interested in voting by mail.”

In the most recent available data, there are currently 4,003,113 Democrats and 3,434,125 Republicans — an advantage of just 16.5 percent. And historically Republicans have outperformed their registration numbers, which is how they held their majorities in the Statehouse in 2020, as well as picking up the state auditor and treasurer’s offices.

With predictions of a red wave — and President Biden’s approval rating down 20 points since he took office just over a year ago — Pennsylvania Republicans feel optimistic.