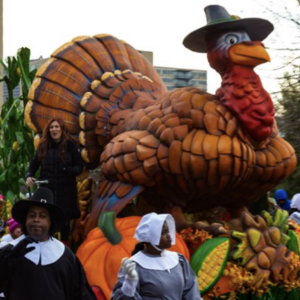 Whenever I think of Thanksgiving, I think back to an article I read by noted author Alex Haley. He was serving in the Coast Guard during World War II and on Thanksgiving Day it occurred to Haley that the day really was about giving thanks to those who had helped him the most. He proceeded to write the three most important people in his life, and he was amazed that in their return letters, the recipients were overjoyed.

I have used the Haley technique with several people in my life and works tremendously. However, I’ve also decided to write this open letter to the people in the Philadelphia area that I’m thankful for this year.

First, I want to thank Northeast Philadelphia state Rep. Martina White for her tireless work in protecting you and me by directing the successful impeachment process against Philadelphia District Attorney Larry Krasner. Martina had to do very detailed and relentless presentations over many months to her colleagues in Harrisburg in order to overcome their reluctance to challenge Krasner. Many colleagues acknowledged Krasner’s violations, but she gave them the will to move forward. Let her know you are thankful for this.

Martina’s doggedness might only be surpassed by Steve Keeley, a reporter for Fox 29. Steve’s Twitter is a running account of what is truly going on in the Philadelphia area. He is a one-man news department who is always at the center of the action. He has been particularly good at taking us inside the stores that are leaving Philadelphia or curtailing their hours due to crime.

I’m not just grateful this year for the people helping us against the worst that is happening in our area. I’m also grateful for John Middleton, owner of the Philadelphia Phillies. Middleton’s willingness to spend a ton of money and to help pursue great players personally led to one of the greatest sports rides of our lives. I broadcasted from the first Phillies block party for fans prior to their first home game against the Atlanta Braves and it was a magical day. I expect that next season the Phillies will continue to contend for a championship, but this year’s team will not be forgotten.

New Jersey state Sen. Ed Durr, who defeated former state Sen. Steve Sweeney and made national news was a true everyman story and he is doing great work in New Jersey. He gives me great hope that New Jersey will not remain under almost complete one-party rule that has made many people flee the state’s unbelievable taxation and regulation. Ed still drives a furniture truck and I think that connects him to life in New Jersey better than any politician.

If New Jersey is dominated by one-party rule, then Philadelphia is New Jersey on steroids. When the last Republican mayor of Philadelphia was born, Billy the Kid was still alive. If you’re a Democrat like state Rep. Amen Brown of West Philadelphia, it’s easy to just go along with the party and hope to advance through the ranks. Brown has chosen to break that mold and fight for his district, speaking out about Larry Krasner and taking on quality-of-life issues. I think he has a reasonable shot of being the next mayor of Philadelphia.

These are just some of the public people for whom I’m grateful. I’m also grateful for the opportunity to write for the Delaware Valley Journal.

And of course, I’m very grateful for all my listeners at Talk Radio 1210 WPHT.

I hope you’ll take Alex Haley’s advice and drop a note to the people you are thankful for.