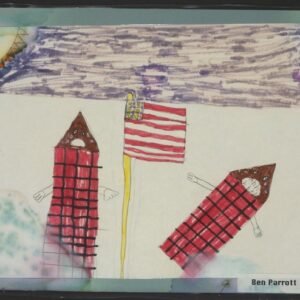 From the Library of Congress's 9/11 collection.
[IS] Opinions

I attended a very nice 9/11 commemoration event last Saturday at Gorkas Park in Roxborough. There was a good crowd, and the local VFW went all out to put on a very patriotic event. The only discordant note to me was stuck by the local state representative who repeatedly decried the fact that we had unity on 9/11 but the country is so disunified today.

I usually excuse this 9/11 approach as the result of people who speak to crowds and need material to get them through the speech. I googled this Democratic state rep’s voting record, and she follows the typical very liberal posture that you’d expect from a Philadelphia Democrat. There is nothing in that that is unifying to me.

I much more preferred the speech of the local VFW leader who repeatedly told the crowd that the message of the day was “never forget.” He also cited the 13 heroes recently killed in Kabul and decried those who try to erase history by taking down public monuments.

I thought he approached 9/11 in the manner we need if we are going to raise generations that understand the attack on us 20 years ago by radical Islamic terrorists who wanted to kill as many of us as possible and bring down our institutions. It is not just important to use that approach to give honor to those who were slaughtered on that day but to remind us that we’re still facing threats like this from terrorists like the Taliban and Al- Qaeda.

When I got home from the event, I saw New York Post columnist Andrea Peyser’s piece on 9/11 that passionately pointed out the woke in this country have been successful in censoring the elements of exactly what happened on 9/11. She pointed out only 14 states have mandated classroom instruction about the multiple attacks on 9/11. Texas, Oklahoma, Nebraska, Illinois, Indiana, Tennessee, Mississippi, Alabama, Georgia, South Carolina, West Virginia, Maryland, and New York are the only ones.

She writes, “Even governments in New Jersey and Connecticut, two states that lost a large number of people who came to work in New York’s fallen World Trade Center, have not seen fit to require that all school kids learn why some parents or grandparents failed to come home one day in September.”  Even though Flight 93 is often used to cite how Americans fought back on that day and stopped the Capitol from being hit by crashing the plane in Shanksville, Pennsylvania, the state has not mandated that 9/11 be taught.

I have already started to contact Pennsylvania Republicans and demand that they get a bill started that would mandate schools provide significant classroom instruction on the terror attacks of 9/11. They can certainly use the models put into law by New York and 13 other states.

Who would object to this? The woke education insiders who fear it will result in anti-Muslim sentiment? Are there rising cases of that in the 14 states that have mandated this education? Would Gov. Tom Wolf veto a mandate of this teaching? On what grounds? You and I know the teaching on the attacks must stipulate that the hatred of Bin Laden and his crew is not the mainstream teachings of Islam but a hateful variant. This can be emphasized.

It’s time to retire all the talk of the unity that we usually hear and push for a unity that says we must clearly pinpoint the ideology of the terrorists that struck America that day and accept as hard as it is that have not yet been completely defeated. That kind of resolve will truly honor all those that we lost.