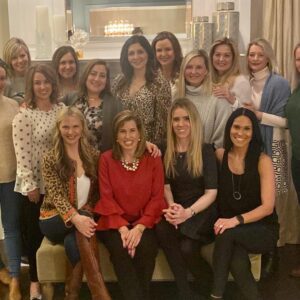 GEERLINGS: Conservative Women Are Pushing Back Against ‘Cancel Culture.’

The Conservative Women of the Mainline (CWML) are shouting out to left-wing elitists…..We are no longer going to sit back and keep quiet. We are taking a stand and defending the principles and foundation our country was built on. It is time to bring back some semblance of sanity to our country, our communities, our schools and call out the hypocrisy of the liberal left for what it is —- a socialist movement that is destroying America.

We are a group of conservative women living in the suburbs of Philadelphia who felt politically isolated in our often outspoken, liberal communities. And more importantly, we are women and families who love our country and want to make a difference in our community and our future. Our children’s future.

How did we begin? In spring 2020, a small group of friends from the suburbs of Philadelphia began talking about how isolated they were feeling in their often outspoken, liberal, communities. We bonded over common political views, opinions on COVID restrictions, and school closures and we knew we weren’t the only women living on the Mainline who was feeling alone.

As a group of ‘Doers’, we brainstormed about how to find other like-minded women and decided to start a private FB page called ‘The Conservative Women of the Mainline’. As the summer passed, we were in awe that our FB following grew to more than 1,000 members. Since its inception, the group has expanded far beyond our local area, reaching people all over the US.

Conservative women began relying on our FB page as a safe place to voice their views and support others. As our FB numbers were growing, we quickly realized that as a united group, we could bring about change, by creating a powerful conservative voice to target key issues. With our Facebook group growing quickly, the “doing” began. In just a few short months, we formed a legal entity, created a website, built a 16+k Instagram following, and obtained 300 plus members. We hold monthly membership meetings and feature guest speakers.

In Pennsylvania communities and in other states, CWML is working to change the makeup of school boards, city councils, and other elected offices. As a team, we have had numerous political fundraisers and speakers, created billboards with conservative language, and distributed petitions with school board messaging. Fueled by inspiration, determination, and motivation we plan on doing so much more.

We are raising money and donating funds to like-minded individuals and causes that will build better communities and a better America. Our objective is to join forces with other Republican and conservative groups and families to support common causes with the ultimate goal of promoting freedom, conservative activism, and unity.

Alicia Geerlings, Vice Chairman, Conservative Women of the Mainline, is an interior designer who lives in Devon. She is a lover of America, her family – human and furry, her friends, her garden, her job, and God.