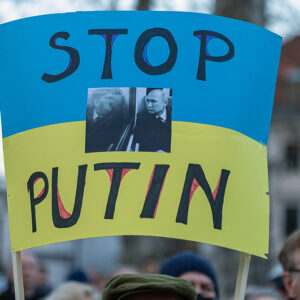 Tucker Carlson was on the news the other night, apologizing for being wrong about Putin. Well, he wasn’t exactly pulling a “full Catholic” (“My fault, my fault, my most grievous fault,”) It was more of a, “Well, okay, I got some of it wrong; but it’s because everyone else acted stupidly, and how was I to expect that everyone else was going to act so stupidly?”

In other words, Tucker took a look at the footage coming out of Ukraine, with smoldering buildings, screaming children, and fires near a nuclear reactor, and he decided that — just perhaps — being harder on Joe Biden than on the heartless architect of this evil assault was a bad idea.

Tucker is typical of many media types on the right who have decided that Ronald Reagan is an outdated symbol of conservative glory and that Republicans should become more like Charles Lindbergh:  Isolationism today, isolationism tomorrow, isolationism forever. I don’t remember hearing Ronnie saying, “Mr. Gorbachev, tear down this wall–but only if you want to, and take your time about it since we’re not in a rush.”

If I sound petulant and a bit bitter, it’s only because I am.  The attitudes and reactions of many on the right have astounded me from the day Putin decided to march across the border of a sovereign nation and seize it.

The other night, I’d had enough. I cracked my knuckles and began to tweet:

“I promised not to preach. I lied,” I confessed. “Watching scenes of the destruction in Ukraine and desperate families at train stations, I feel helpless and angry. My anger is at Putin, Russia, and anyone still preaching non-intervention.

“Fear is legitimate, including fear of nuclear incidents. Ukraine is the home of the ghost town Chernobyl, where ground still crackles and glows with the remnants of the 1986 apocalypse. But to be afraid is understandable. To make isolationism your religion is immoral.”

“If you think that any of what is going on in Ukraine is not our business or is less important than domestic affairs, you are deluded. Full stop. Full, damn, stop.”

Those words cost me online “friends,” as I expected they would. Because in this craven new world, we are as divided by our politics as we are by rivers, mountains, and generations. We no longer look at things as Americans who stood athwart history telling dictatorial thugs to stop. We have lost our connection with the elders who survived Pearl Harbor and Normandy. And to those who say that, unlike today, America was attacked in 1941 and we were fighting for our survival, I know what’s at stake today: Our identity as the greatest country on earth, a haven for the oppressed and dispossessed.

Call me Jurassic, call me a throwback to naïve and innocent times, but I cannot believe this country and its people are willing to sit back and watch as a violent psychopath with an army bombs women and children back into the Stone Age. I can’t believe our only response to the slaughter of thousands in the heart of Europe will be sanctions and symbolism. Changing “Russian Dressing” to “Freedom Sauce” won’t save a single life.

Ukraine is used to being victimized by the West. The New York Times ignored the man-made famine that took place almost a century ago, which was Stalin’s strategy of genocide against a troublesome people.

To me, when innocents are being killed, there are only two tribes: The heroes and the fools. And they are showing themselves more clearly, with each deadly day that passes.