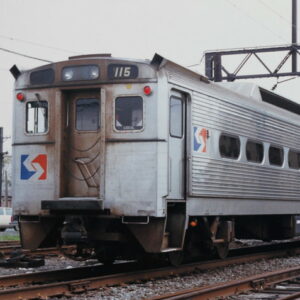 FLOWERS: Riding the Market Frankford El, From Magical To Monstrous

I’ve been riding the Market Frankford El for more than half a century. I was about four the first time I got on at 52nd Street with my grandmother, and we rode into the city to go to Wanamaker’s (after an initial round of shopping along the old 52nd Street commercial strip.) It was magical, gliding high above the city, watching the rooftops fly by, and seeing the ant-sized figures milling around below. I will never forget those first impressions of the El or the excitement of those rides in the 1960s with Mamie Fusco.

Later on, I started traveling alone, whether it be to work in Center City, weekend forays to the museums, shops, and restaurants, or simply to take long walks by the river drives (which in those days were called “East” and “West.”)  It never occurred to me to be afraid. The El was my friend, I who didn’t get my driver’s license until I was 40 and broke out into a cold sweat at the prospect of navigating city streets behind a wheel I controlled.

I can’t exactly put my finger on the moment that changed, when fear crept into my experience. I don’t think it was a specific incident because it evolved over a period of time. One day I paid my fare and stepped into the car at 69th Street headed east and felt an unusual, uncommon, and very unwelcome sense of discomfort.

And now, I can put actual events to those intangible feelings.  I’ve personally been assaulted on the El in the past few years, usually just with verbal epithets or threats from people who looked to be stoned, intoxicated, or mentally disturbed. My solution was to move to another car as quickly as possible.

More recently, I was punched in the back of the head by someone who looked to be about 13, wearing the sweatshirt of a local school. And the adult who was traveling with the child, who could have been a girl or a boy since most of the face was covered by a mask “for safety” (irony abounds) actually got up to defend him/her when I picked up my phone to call 911. Then, the kid knocked the phone out of my hand. And that adult?  He lunged at me, mouth filled with foam (I’d say he was a rabid animal but it was likely just spitting). I was able to get off at 40th Street before he hit me.

A few months before that, I was pushed and kicked by another youngster, this one clearly under the influence of drugs. Both incidents occurred in the middle of the day, with other people on the train cars.  A few tried to intervene, but most kept their faces buried in their phones. I suppose they thought that if you don’t look up, real life isn’t happening.

To be quite honest, I’ve been very lucky to have only had these random incidents of low-level violence happen to me, given the fact that I’ve been riding the rails for over a half-century.  Tragically, others haven’t been as lucky.

The day after I was punched by that young thug, a woman was raped on that same route. It started in the city and continued all the way through to the 69th Street terminus when police finally got on to stop the crime. The true crime, other than the horrific sexual violation, is that the security cameras showed people on the El who did nothing. Nothing.

They didn’t call 911. They didn’t intervene. I thought perhaps they might not have known what was happening, but there’s no question that they did.  You couldn’t miss it.

Finally, a SEPTA employee called the police, who as I said were waiting when the train came to a stop.

This is an urban outrage that is no longer uncommon. The violence of the streets has entered into the train cars and bled into the lives of people who, like me, need to use public transportation to manage their day. I suppose we could all buy cars, or we could all wait hours for a bus to come and drop us off at a location miles away from our destinations, or we could Uber everywhere. Those among us swimming in money and affluence can hire a driver.

But for the rest of us, the price of a weekly Key card is a luxury we can barely afford but will purchase because we need mobility.  The fact that we take our lives into our hands for that mobility is an obscenity.

There have been shootouts at train stations filled with people in the middle of the day.  There have been deaths.  There have been long rides when you look in the faces of the strangers seated across from you and wonder which one of them is going to hurt you, slash you with a knife, expose himself to you (that’s happened to me as well), or in the best-case scenario, “only” steal your wallet. This is daily life on SEPTA, and this is the world created for us by DA Larry Krasner who allows criminals to slip underground, into the bowels of the trains and prey on the defenseless commuter.

We could vote Krasner out of office, which I hope we do. But that won’t completely solve the problem.

We can put more police into the cars, which I also hope we do. But that won’t solve the problem, either.

The lesson of this latest rape on the Market-Frankford Line is that we need to create a society where criminals, addicts, and sociopaths don’t have easy access to the rest of us. That’s a lot harder and takes common sense, people who aren’t afraid to be called racist or bigoted or uncaring, and I don’t think I’ll be riding the rails long enough to see it happen.