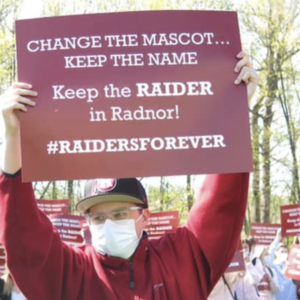 School Board meetings are rarely exciting.  Administrative procedure nerds might be interested in watching a group of our neighbors talk about “Roberts Rules of Order,” who wants to second a motion on whether a bus stop should be eliminated or added, who wants to suggest an award for the cafeteria lady who’s hitting her 50th year serving up burgers, or which sport is going to be eliminated (none, ever).

But in general, they are snooze fests.  Not so the meeting of the Radnor Township School Board that took place last Tuesday evening via Zoom.  I have come to the conclusion that the one good thing about virtual meetings is that they tend to diminish the amount of likely bloodshed at any given gathering.  The lack of physical proximity is an advantage when, for example, you have some community members accusing others of being white supremacists, racists, bigots or at the very least, remedial history learners.

And that is exactly what happened at the Radnor School Board meeting, which I watched with a combination of bemusement, interest, and ultimately, horror.

The meeting started innocuously enough, with the usual points of order and a reading of the agenda.  But then, the nine board members sat back and invited public comment about the highly controversial decision to retire the Raiders name.

To call it “highly controversial” is to call the tsunami in Thailand a gentle spring rain.  There have been accusations of racism thrown around like confetti at Mardi Gras over the past months, ever since the board decided in a stealth manner during the height of the pandemic to address this issue of overwhelming urgency.

Most of the accusations have been made in that passive aggressive manner soccer moms have perfected: posting signs on lawns and writing letters to the editor.

Others have been more enterprising, albeit cowardly, in launching their slurs via social media.  Very few of the accusers have put names to their accusations, preferring to remain cloaked in the anonymity of the dark web.  Who knew Instagram, home to cupcake recipes and makeup tutorials was also a great venue for Mortal Kombat?

That is why I have to give some faint credit to the women who appeared at the board meeting on Tuesday and attached their names and faces to the accusations of racism.  It’s all there on the board’s You Tube channel, so I don’t need to mention the ladies’ names, but if you check out the video from the meeting you will see a mother-daughter tag team, a very cheerful and energetic transplant to the area, and several others who were unashamed to call their Radnor neighbors racists.

Of course, not all the neighbors were racists, just the ones who were trying to hold on to a well-loved tradition and name:  Raiders.  It’s really not necessary in this column to rehash the history of the controversy, other than to say that some people are convinced that the name Raider is inextricably linked to offensive images of Native Americans.  Regardless of the fact that the name has been used in other venues and to describe other people (pirates, for example), the kind of folks who call their neighbors racist at public meetings don’t have a great capacity for nuance.  They follow former Justice Potter Stewart’s maxim about obscenity, only they graft it onto racism and white supremacy: they know it when they see it.  They, in fact, are the final arbiters of what is right, what is wrong, and what is offensive.

Well, I found those ladies to be extremely offensive.  Sadly, though, they were allowed to malign their neighbors in the community with impunity because, as a board member suggested, they had their First Amendment rights.

As a lawyer, I fully concur that they had those rights.  But as a person who herself has been called a white supremacist, a bigot, a racist, a hater, a supporter of oppression, and lots of other delightful things, I would also expect the adults in the room to issue an apology to the targets of that “free speech.”

Speech comes with consequences.  You cannot be censored, but if your words are improvident, cruel, incendiary, unfounded and completely pretextual, you should expect to be, at the very least, criticized by persons of good will.

Those board members remained entirely silent during the tirades.  I watched them on their separate Zoom screens looking either bored, disengaged, perhaps a bit shocked, barely troubled, and in one case, nodding in apparent agreement with the slanderous comments.

That is the problem.

People can call other people racists, and they do (although the overuse of that word causes the rest of us to roll our eyes to such an extent that we have now pulled muscles).

But a public school board, if it provides a forum for that sort of “free speech,” should at the very least clarify that it does not believe the community to be racists, and to issue an apology to the rest of the community for allowing that type of conduct to pass for “public comment” in a forum to which all were invited and in which all were supposedly welcome.

They have not done so, as of this writing.