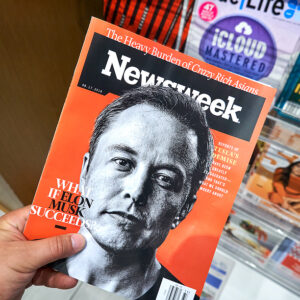 I’ve been singing this to the tune of “Eli’s Coming” by Three Dog Night ever since I heard the Tesla founder just bought a sizeable stake in Twitter. It’s not that I think things are going to change overnight, or that President Donald Trump will be gracing us anytime soon with midnight commentaries from the golden bidet.

However, the fact that an accomplished capitalist has decided to look in the face of censorship–and call it what it is–fills me with a hope I haven’t felt since the initial days of the Black Lives Matter riots. I suppose I should call them protests, because “riot” was one of the words that used to get you banned from social media platforms back when Orwell was just an old, dead White guy with no current relevance.

But, Elon’s coming, and with him the possibility that people will actually be able to express themselves without fear of using the wrong word, an improvident letter, an offensive pronoun. Musk may not be the sort of change agent we need in these censored times, but he’s a start.

The thing that seemed to push him over the edge into action was Twitter’s decision to suspend the satirical site, Babylon Bee, because it had the audacity to point out the fact that Rachel Levine is a biological male. Yes, she is a trans woman who spent the vast majority of her life as a man. Yes, she was praised by USA Today as one of its “Women of the Year,” (Unlike Justice Ketanji Brown Jackson, the newspaper can at least propose one definition of the term.) And yes, it’s not nice to make fun of people.

But, um, that’s what satire is, and really good satire can sting. The Babylon Bee has an exquisite sting (hence the name), and there are many of us who need our daily dose of what I like to call “uncommon nonsense” from some of the best writers in the business. Its sharp, perceptive, sometimes cruel but always entertaining, and intelligent commentary is water in the ideological desert, at least for thirsty conservatives.

Twitter, however, wasn’t amused. When Elon Musk saw this technological megalith was selectively silencing people who violated the accepted standards of woke virtue and secular sacrament, he did what any good entrepreneur would do: he bought himself some power. I love the fact that, in this case, money really did talk. Or rather, tweet.

Of course, progressives are apoplectic. They started out pretending that it was no big deal and that Musk’s share of the company wouldn’t change its direction. Then, when he was asked to sit on the board, they started talking about how Twitter wasn’t a governmental entity and the constitutional principles that they usually venerate (choice, equality, fairness) didn’t apply to the marketplace of ideas.

Fortunately for them, Elon has, at least temporarily, decided that he won’t join the board. This might be because he would have been limited to only a 14.9 percent stake in the company as a board member, and could exercise greater financial control if he wasn’t on the board.

Regardless, his decision not to assume an official leadership position hasn’t stopped the apoplexy.

The thing that these triggered Twittorwellians don’t understand is that the marketplace is not just composed of government actors.  If a private company reaches such mammoth dimensions that it essentially “becomes” the marketplace. It is a quasi-governmental entity, and I think that Justices Brandeis and Holmes would agree that the First Amendment has at least some relevance.

Watching progressives sweat is both a delight and an inspiration. I don’t have the billions that Elon Musk does, but I think I will start using my own limited wallet to make my voice heard. I’ll cancel my subscription to WHYY because it no longer welcomes conservative voices. I already canceled my subscription to Disney Plus because of its support for inappropriate content for toddlers. The Inquirer, which seems to think White people killed Christ and did a lot of other things to destroy the universe, is now lining my lizard’s cage. Elon is an inspiration.

But beyond the money, it’s good to see a public figure step up and defend speech, all speech, regardless of content, against the ideological Stalinists. And it’s really great to know that Elon’s coming, and we don’t need to hide our tweets, anymore.