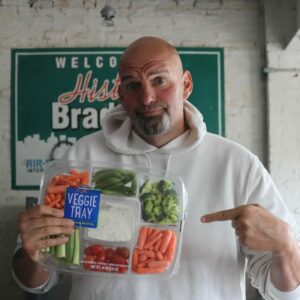 John Fetterman likes his hoodies. He doesn’t seem to have any other piece of clothing in his wardrobe, and he struts around in the “everyman’s” uniform as if he were campaigning to repair the broken cement on your front curb instead of a seat in the U.S. Senate. Fetterman, who comes from affluence, has played this “hail fellow well met” game all of his adult life. I’m not sure how it went over at Harvard, but it’s snookered a lot of folks in the media.

Bully for him, the Twitter bully. Fake it till you make it, as they say.

But I find it particularly ironic that a guy who was born on third base and thinks he hit a home run by simply sauntering over to home plate has decided to engage in an all-out attack on his opponent, Dr. Mehmet Oz, over his financial success. Fetterman has amped up his social media and television assault on the Ivy-educated doctor by trying to depict him as a man born with a platinum spoon in his mouth. And to the gullible, it has some attraction.

Recently, there was that video of Dr. Oz strolling through the store he misnamed and gathering up raw vegetables. He made the tragic mistake of calling them “crudités” which suddenly became the new “c” word with everyone who shoves a shopping cart at the local Aldi mocking him for his pretentiousness.

Crudite is not in my regular vocabulary, even though I was a French teacher in another life. And yet, I can’t figure out why this amounts to some sort of moral failing on the part of the man who just wanted to dip his carrots in some guacamole.

It might be a Philadelphia thing. I remember two decades ago when then-presidential candidate John Kerry came to town and made the mandatory, ceremonial visit to Pat’s Steaks. (Or was it Geno’s? Hardly matters.) The poor man made the mistake of asking for Swiss cheese on his sandwich, and to this day when you say “John Kerry” to the average South Philadelphian you’re likely to get a smirk and some version of “the moron who hated the whiz.”

He may have won the Purple Heart in Vietnam, but the Ketchup Queen’s husband will always be remembered in these parts as the Swiss Wuss.

These modern-day versions of “Let Them Eat Cake” are a perfect reflection of the real San Andreas Fault in society: Class distinctions. I’ve always maintained people are more divided by their bank accounts than by race, gender, sexual orientation, or any other attribute of identity. And despite the whole Horatio Alger idea that you can pull yourself up by your bootstraps and make something of yourself, earning money is still considered a character flaw.

My friend Jenny DeHuff tweeted the other day that, “There is absolutely nothing wrong with wanting wealth and eventually attaining it. Just saying.” I replied “Absolutely. As long as you work hard and/or don’t hurt anybody in its attainment, there’s not a bit of shame in it. A man’s reach must exceed his grasp else what’s a heaven for? Thank you, Robert Browning.”

Unfortunately, many Americans, including many Philadelphians, think that if you make money it means you’re a bad person. At the very least, you have your priorities messed up. At the very, very least, you should give them some of your money. I think that despite what we say about being proud capitalists in the USA, there is a vein of opportunistic socialism threading its way through our circulatory system. Envy is real.

Oftentimes, though, we cloak it in criticism of conspicuous consumption.

John Fetterman is on the attack against Mehmet Oz because he has a lot of houses. A lot of his supporters agree, and troll Oz with glee. There is a unique hypocrisy in the fact that the home Fetterman owns was purchased from his sister for a dollar. But the Democrat has created that carefully-crafted hoodie façade that turns him into “one of us.”

Query how many times “one of us” has been able to purchase our home for less than the price of a Wawa coffee. But that’s a topic for another column.

The point is the sort of people who attack others because they have worked hard, like Oz, and attained affluence are not concerned about the little man. They are envious folk, who would love to be able to set out a tray of crudites, brie, and Chablis for their friends. They would jump at the chance to replace the Wiz with Swiss on their steak sandwiches. But since they’re stuck with chopped vegetables, they’ll pretend to make fun of those who actually can enjoy the finer things in life.

All the while looking for their French dictionaries.