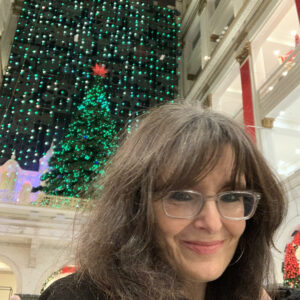 One of my earliest memories of Christmas is boarding the Market Frankford El at 52nd Street to go to Wanamaker’s.  I was either 4 or 5, bundled up in a coat with a tiny brown muff and a fluffy fur hat as my elegant accessories. I remember thinking that this was an adventure, a train that soared above the streets and took me to a magical place where the store windows beckoned with toys and treats.

I’m sure we eventually stopped at Lits Brothers and Strawbridge’s, but we were a Wanamaker’s family so my most vivid recollections revolve around that majestic castle of wonder on 13th Street, the solemn Eagle made of gold (convince me it’s not) and the organ, suspended like a benevolent king over his retail kingdom. 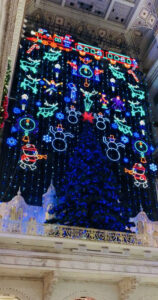 And standing out amid the mists of memory, shimmering with twinkles and music and fountains of rainbow-tinted water was the Light Show.  If you say “Light Show” to a child of the 50’s, 60’s and 70’s, they will not think of the Comcast Center and its glitzy panorama of technological triumph.  They will not think of the Christmas Village at Dilworth Plaza, lovely and proletarian and marginally reminiscent of a European marketplace (an idea that evaporates completely at the sounds of Philadelphia, harsh and guttural and punctuated with expletives).

They will not think of exquisite Longwood Gardens with the canopy of crystal and the trees that imitate jewels, and they will not think of the tiny suburban towns that line their lampposts with ropes of white lights (never colored, always white) to achieve some fashionable ambiance.  They won’t even think of the Miracle on 13th Street, South Philly’s gift to the unsuspecting and the weary.

They-we-think of the wall at Wanamaker’s, which looks deceptively unexceptional during most of the year.  Sometimes, if you look up during the dog days of August when the sweat is dripping down your collar, you can just make out the phantom images in the wiring, barely visible against the dark background.  And yet you know it’s there, dozing gently through the summer and autumn months until, in December, the switch to our childhood is turned “ON” and the Light Show begins.

I was there last week, alone with hundreds of strangers but with my Mom Mom and Pop Pop at my shoulders, my mother and father by my side, and all the loved ones who have left me here to move ahead without them, hovering in the ether.  I was a child again, in my muff and fluffy hat, looking up in wonder as what they’ve called “The Largest Christmas Card in History” came to life.  Rudolph, Frosty, the Sugar Plumb Fairy, the Snowflakes, the trains and the clocks and the music came back in waves of blessing.  I was 4 again.  And although the voice that narrated the stories and the traditions wasn’t the deep rich bass of John Facenda, enveloping me in warmth and confidence that Santa was real, Julie Andrews did almost as good a job keeping the magic alive.

I looked around at the children, eyes turned up to the wall that seemed so much bigger when I was a child, and I hoped that they were suspended in the same mystical magical bubble that carried me along in 1965.  From their expressions, I am pretty certain that they were, as were their parents and their grandparents, who had abandoned the worries and cares of the 21st century and settled back-for a brief moment-into the glory of the recent past.

It’s called Macy’s now, and the dancing waters are gone, and the cheerful voices have changed, and I’m no longer a child waving goodbye to Frosty, as the images fade away.  I am much closer to the end of life than the beginning, and I no longer ride the El out of fear and sadness for what it’s become.  I no longer walk, fearless, down the streets of the city with my hand in the hand of my grandmother, certain that she will fight off the lions and dangers, and take me to Santa, and help make my wishes come true.

But I still stand, in awe, before that wall of light, and thank God that it still has the power to make me feel Christmas, in my bones and in my flawed Philly heart.