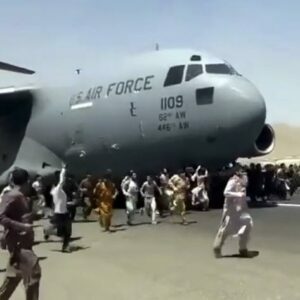 FLOWERS: Biden’s Legacy Will Be ‘He Left Them Behind’

Everyone remembers the movie ‘Saving Private Ryan,” a fictionalized account of what happens regularly during every war the US has ever been engaged in:  American soldiers searching for a missing brother-in-arms.  It was the celluloid confirmation of a truth, one carved in marble and on our hearts, that we should leave no man behind enemy lines.  That usually applies to soldiers, but is equally applicable to civilians.

I thought of Tom Hank’s masterpiece as I watched the last U.S. troops pulled out of Afghanistan. I will not argue the merits or politics of that withdrawal, beyond saying that I did not think we should leave.  This puts me in that small minority of Americans who believed our presence, small though it might be, was a symbolic deterrent to the tyranny of fundamentalists.

But even if I’d agreed with Biden’s military exodus, I would have the same opinion about the manner in which it was conducted.  Since I am governed by the rules barring obscenity which, as Justice Potter Stewart noted, you would know if you saw it, let me just say that I am ashamed of our president and his administration.  The reason can be summed up in these few, acceptable words:  He left them behind.

“Them” includes American citizens, Afghan green card holders and, most importantly, Afghan allies who worked side by side with the United States over the last two decades.  Many of the people in that last category are still over there behind enemy lines.  They are the ones with the targets on their backs because the Taliban know who they are (in part, courtesy of information provided to them by the U.S. government in an incompetent and inexcusable attempt to streamline the processing of refugees) and because they are considered traitors to the Islamic regime.

As an attorney, I have worked with victims of the Taliban in my immigration practice.  They are fierce and courageous, people who believe in the inherent dignity of all human beings and who do not define the value of a person by their gender or their nationality. These Afghans worked tirelessly to protect our troops, and that is why so many in our military have moved mountains to get them out of Afghanistan, even as our own governmental bureaucracy made it otherwise impossible.

Biden is not the only reason the bureaucracy exists, although he’s been a part of it since I was in the 6th grade (and I turn 60 this year.)

But he is the catalyst for this last catastrophic episode, these photos of desperate Afghans clinging to the wings of planes before plunging to their deaths, these cocky Taliban fighters marching around with abandoned U.S. weapons, these women huddled at airports wondering if they will have a future covered in burqas or one that shines the torch of freedom, the one held by Lady Liberty, in their direction.

That’s on Biden, and all the media and Democrat spinning will not be able to wipe that “damned spot” off of his hands.  If he were only willing to admit that and stop trying to take some sort of victory lap for ending a war most Americans hated, I could muster some respect for him, given the fact that I left the GOP over Donald Trump’s decision to abandon our Kurdish allies in Syria during the last part of his administration.

At least I was willing to do that, and be honest and public about my anger with this breach of faith.  Others who feel desperately linked to their vote for Biden, who are afraid of being called fools for having chosen the architect of this debacle, will refuse to admit that he has left people behind.

This administration broke faith with those who depended on us to get them out safely.  The pundits will tout the 100,000 or so who were shepherded to safety in a shambolic and disjointed effort, to deflect attention from the ones who are still there, waiting.

They saved Private Ryan.  But that was fiction.  This is tragedy.