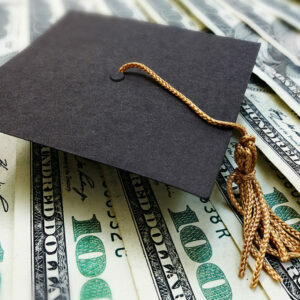 Posted to Politics May 02, 2022 by Christine Flowers

I am only the second person in my family to have attended college.  My father was the first, and it took him years.  In hours stolen from the three or four day jobs he juggled, and from the young family that he was creating with my mother, Ted Flowers figured out a way to get an undergraduate degree from the University of Maryland, and then a law degree from Temple.

He graduated with honors from both institutions and was on the Law Review at Temple. He paid his way, slowly and methodically with a little bit of help from the government and none from his parents.  Daddy did it by himself.  He owed nothing, to anyone.

When it was my turn, he was able to pay some of my tuition, and I worked a few summer jobs and took out loans for the rest. A year and a half before I graduated, my father passed away from cancer. There was money in a trust fund for my education, but I still paid back those student loans with money I earned, not his.

It was an obligation I felt I owed, to the government and to my father’s memory.

When I heard that President Joe Biden was considering a plan to forgive student debt to the tune of $1.7 trillion, I felt a mixture of emotions. The overriding one was white-hot anger. I thought of my father, and all of those moments we lost with him because he worked to pay his own way through school. I thought of my maternal grandparents, who had to leave school in the 3rd grade and never had the opportunity for a college degree. I thought of my mother, whose high school diploma was considered a golden achievement by parents who had a profound appreciation of the education robbed from them by circumstance.

But the thing that really infuriated me was the thought that a huge portion of the students who’d benefit from this debt amnesty were already affluent. As Michael Brendan Dougherty reported in National Review, “The overwhelming majority of student debt is held by the affluent; less than 10 percent of it is held by the bottom third of earners. Nearly 40 percent of it is held by students with advanced degrees, many of them now doctors and lawyers. Unemployment for the college-educated is less than 2 percent.”

These affluent borrowers are already making out big thanks to the “temporary” halt on college loan payments that began when the pandemic was at its worst but continued under Biden well after the need had passed. That holiday from reality is costing taxpayers who never went to college or paid off their loans about $115 billion already, according to the Committee for a Responsible Federal Budget (CRFB).

This is class warfare, only it’s the affluent going after the working poor and middle classes. It is ridiculous to frame this “loan forgiveness” in terms of these mythical blue-collar workers spending hundreds of thousands of dollars on women’s studies degrees and classes in the etymology of dead languages (and as a former language teacher and a Romance Languages major in college, my sarcasm is only partially sincere).

Biden has since said he’s not willing to forgive all student loans, though he hasn’t said what his limit is.

Still, when you look at the actual statistics on who will benefit from Biden’s plan, you see how much of a gift-wrapped windfall it is for those who don’t need it and didn’t earn it. It penalizes those of us who paid back our loans, sometimes at great expense to our families.  It mocks those who put off having families because they couldn’t afford them. It disrespects those who were wise enough to choose the trades and develop valuable skills. It sticks us with the tab for the affluent, the dilettantes, the ones who put off for tomorrow what they won’t do today: Pay their own damn bills.

And let’s be honest: Colleges have been inflating their tuition because they can, because they know that students will be able to get loans to subsidize their grandiose dreams of new athletic facilities and Ritz-level dorm rooms and state-of-the-art computer centers and fabulous alumni halls, etc.

Those who complain about the stratospheric increase in tuition have a point, but the American taxpayer should not have to guarantee that Yale, Harvard, Penn, my own alma mater of Bryn Mawr, or even my other alma mater Villanova the ability to create these affluent Xanadus where kids can hang out for a few years before they hit the real world.

The prospect that people like my grandparents and their offspring will be the ones most harmed by his amnesty outrages me. More than that, it makes me want to fight back. I plan to, come November.