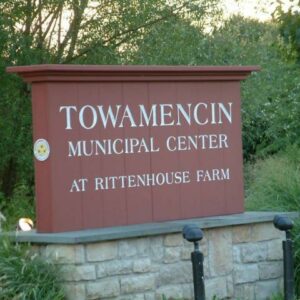 The Towamencin Board of Supervisors has voted 4-1 to sell its sewer system to NextEra Energy for over $115 million. It is yet another example of municipal officials grabbing a large sum of “free money” offered by Big Water despite significant citizen objections. A good summary of the actions leading to the sale can be found here.

We attended the April 20 public meeting and concluded it was essentially a sham meeting. Its purpose was to check off the box next to “public input completed.” The supervisors had already made up their minds. One board member was obviously a dominant personality driving hard for the sale. As noted below, critical information was withheld limiting the public’s ability to ask relevant questions. Public comments were unilaterally rejected and the tone of the meeting became almost combative.

Towamencin “hired” a financial consulting firm, PFM, to advise them on the sale. However, PFM does not get paid unless there is a sale. A major part of the payment is a percentage of the sale. Clearly, it is not an objective, disinterested party.  Are you surprised that its recommendation is to sell to the highest bidder? PFM actually makes a disclaimer from any liability even if it is negligent.

The key question is whether the citizens of Towamencin got a good deal or did their representatives sell them out. That question cannot be definitively answered without more information that the township has not, and apparently will not provide. However, there is considerable room for doubt.

PFM presented cost data at the April public meeting showing a $400 a year benefit for each household if the system were sold. However, that information was not available until the night of the meeting. There was no time to analyze the data. Subsequent review raises a host of questions about PFM’s analysis:

We conclude it is highly probable that this is a bad deal for Towamencin citizens.  If it was a good deal, all the details of the analysis should have been made public ahead of the decision.  The citizens of Towamencin deserve better than they are getting.

Bill Ferguson is a resident of Landenberg, Pa. and cofounder of KWA – Keep Water Affordable.  Email him at [email protected]