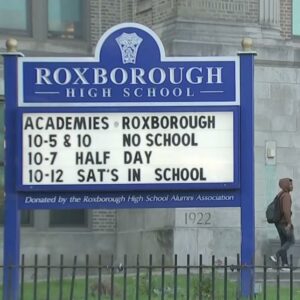 The Roxborough High School community is reeling after a 14-year-old football player died Tuesday afternoon. Nicholas Elizalde and four other juveniles, three of them teammates, were ambushed in a drive-by shooting. It happened at the school following a football scrimmage involving Roxborough and Northeast and Boys Latin.

Elizalde of Haverford Township in Delaware County was a student at Saul High School, a magnet school that does not have a football team. He played at Roxborough under a co-op arrangement between the two schools allowed by PIAA rules.

The impact of Tuesday’s incident was felt throughout the Delaware Valley high-school sports community. Alan Nicholl is a science teacher at Council Rock South High School in Northampton Township, Bucks County. He has also been the boys’ soccer coach since the school opened 21 years ago.

“As an educator and as a parent myself, there’s nothing more important than the safety of our kids. And when you see something like this happen, it should be outrageous to everybody. It’s unacceptable.”

Philadelphia Eagles quarterback Jalen Hurts said he was praying for the victims and their families and, “Praying for change.”

The investigation is ongoing. The shooting occurred shortly after 4:30 Tuesday afternoon as players, coaches, and spectators were leaving the field.

Five assailants got out of a Ford Explorer parked near the field and began firing shots. Authorities said they do not believe Elizalde was the target of the attack; they said they think the 17-year-old victim was.

The vehicle believed used in the attack was eventually recovered in South Philadelphia. It was reported stolen in Delaware County, police said.

Though Tuesday’s incident was one of at least three that have occurred at high school football games, it was the first involving gun violence. In August of last year, a shooting following a football game between host Academy Park and Pennsbury took the life of an 8-year-old Sharon Hill girl. Three police officers are awaiting trial in that incident.