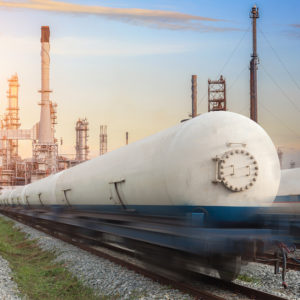 A planned liquid natural gas facility outside of Philadelphia, has drawn the ire of environmentalists concerned about “bomb trains” traveling through the city.

New Fortress Energy, the company behind the project, plans to build an LNG facility northwest of Scranton, Pennsylvania, and ship the commodity either by rail or trucks to Gibbstown where it will head overseas. The port will also be able to handle imported automobiles and can be a potential staging area for windfarms off the New Jersey shoreline.

In its filings for a rail permit, New Fortress said it would move several 100-car trains of LNG a day to Gibbstown to continuously fill waiting vessels — or up to 700 tractor-trailer trucks a day.

Government approvals for the project are nearly done.

Although the Delaware River Basin Commission unanimously approved it last year, they voted last month to delay until at least early December voting on dredging permits recommended by a hearing examiner and staff. The project already has approvals from the New Jersey Department of Environmental Protection and the U.S. Army Corps of Engineers.

“Those who live and work along the railways that will be used are being treated like guinea pigs since the mode of transport is untested,” said Tracy Carluccio, deputy director of the Delaware Riverkeeper Network.

New Fortresses Energy’s rail permit states that it will use several 100-car trains — or up to 700 tractor trailers — to transport the LNG to Gibbstown per day. Historically, there hasn’t been much market demand for moving LNG via rail, according to the Association of American Railroads. The spike in natural gas supplies from fracking and other extraction technologies is changing that.

“For decades, railroads have safely shipped cryogenic liquids similar to LNG, and more than 99.99 percent of all hazmat shipments reach their destination without a release caused by an accident,” the association said in a statement provided to InsideSources. “Recent increases in supply and demand for natural gas have sparked interest in permitting LNG by rail shipments — a far safer option for hazmat transport than over-the-road shipments.”

The proposed rule from the Pipeline and Hazardous Materials Safety Administration (PHMSA), which is part of the U.S. Department of Transportation, would let railroads transport LNG without special permits and was finalized in August. Fourteen states, including Pennsylvania and New Jersey are fighting the rule in court. The decision will be significant for the Gibbstown facility since its rail permit would be the first in the nation.

“Liquefied natural gas has almost never been allowed on rail cars in bulk, because it’s extremely dangerous — it’s explosive! Look, there are laws on the books to ensure safety, and the Trump administration must follow them,” Pennsylvania Attorney Josh Shapiro said in a statement.

In January, U.S. Sens. Ron Wyden and Jeffrey Merkley, both Democrats representing Oregon, wrote to the head of the PHSMA expressing concerns that the proposed rule was being rushed through the approval process “without sufficient evidence to assure the public of the safety of the proposed change.” They noted that in 2016, a train carrying crude oil derailed and caught fire in their state.

“Rather than await further proof of safety and reliability through demonstration of small-scale transportation of LNG by rail, this proposal is opening the floodgates to bulk transportation without sufficient analysis to provide adequate safety guidelines,” Wyden and Merkley wrote.

“Since 2011, there have been two incidents where both the inner and outer shells of these specialized cars carrying less volatile liquids were punctured. Given the small fleet of these train cars in the United States (only a few hundred cars), this does not instill confidence.”

According to the PHMSA, there have been 14 accidents involving DOT-113 tank cars, including the two incidents mentioned in the Wyden-Merkley letter in which ethylene was released in one and non-flammable liquid argon released in the other.

As environmentalists succeed in getting pipeline projects canceled, though, energy companies and others in the sector have had to look for other ways to transport oil and natural gas. Pipelines, according to the Frazer Institute, remain the safest mode of transport.

“Specifically, rail is found to be over 4.5 times more likely to experience an occurrence when compared to pipelines,” the institute noted in its report, adding that just 17 percent of pipeline incidents occurred in the actual pipe.

And a 2017 report by the National Academies of Sciences, Engineering, and Medicine found that although pipeline mileage grew by more than 40 percent between 2010 and 2016, “no new safety problems have emerged from the increased use of pipelines transporting larger amounts of domestic oil and gas.”