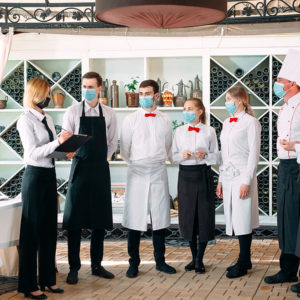 A group of restaurant and bar owners from Harrisburg to the Delaware Valley filed suit Friday against Gov. Wolf and Health Secretary Dr. Rachel Levine over the latest round of COVID-19 restrictions levied on the food-service industry.

At the beginning of the month, restaurants were able to offer dine-in service up to 25 percent of their legal capacity. On Dec. 10, however, Wolf announced that dine-in would be completely halted from Dec. 12th until January 4th, meaning restaurants could only create income from take-out and delivery.

The attorney bringing the suit, Paul A. Bauer III of Pottstown, is also the owner of many of the restaurants listed in the suit. He says he was inundated by others who wanted to join the suit, and the number of plaintiffs could have easily numbered into the hundreds.

“We had to cut this off in the number of people [who might join] because every time — you know, every couple of hours we were getting other bar and restaurant owners interested in joining the suit — but every one of them took time to revise the complaint and revise the petition,” Bauer told Delaware Valley Journal.

“We needed to get it filed as soon as possible because time is really of the essence.”

The complaint says the governor and health secretary issued their decree without “any precise data, research, reports, or other materials” that would show why the restrictions on the restaurants were necessary. Without any backing data, the restaurants say they’re being picked on.

As part of the rebuttal, Bauer cited a recent report by Delaware Valley Journal in which two government officials in the region said that contact tracing did not point to any remarkable or unsafe spread of the virus from restaurants or gyms.

“Most of the transmission that we saw in restaurants was between employees or staff of the restaurant, not so much from employees to patrons,” Montgomery County Chairwoman Dr. Valerie Arkoosh said at a press conference last week.

Gyms were also ordered to stop all indoor activity.

“Gyms — other than one outbreak that was traced to an outside social gathering of multiple gym members — we saw no evidence of transmission in gyms,” said Dr. David Damsker, health director for Bucks County.

“We’re not looking to bad mouth Governor Wolf or to bad mouth at all Secretary Levine, we just want them to show us the data. In their own websites, in their own press reports, they say that they’ve been making decisions since March with a science-based data approach,” Bauer said. “I don’t see it.”

“And if you’re going to essentially take away an entire industry, I think we deserve our right to be heard and have the right to see where that data comes from.”

The suit asks the court to issue a stay against Wolf’s restrictions.

On Monday, the court agreed to hold an emergency hearing on Wednesday a 3 p.m.

“That doesn’t necessarily mean that the court is going to agree that this is an emergency and therefore should grant the stay,” Bauer said. “But that was the first hurdle to get over — a court reviewing it and making their determination that there really is an emergency basis to hold a hearing.”

If Bauer and his group could prevail, it would echo a ruling from California last week when a judge blocked a similar order from Gov. Gavin Newsom (D).

“State and local officials now say restricting restaurants to delivery and takeout (not really a viable option for the plaintiffs in this case) is justified in light of the continuing increase in COVID-19 cases and deaths,” a report on the California ruling from Reason noted. “But as [the judge] noted, that argument hinges on the assumption that restaurants are a significant source of virus transmission even when they follow public health precautions, which the government has failed to demonstrate.”

The Department of Health defended the restrictions when Delaware Valley Journal asked about the data driving the decisions.

“There is a significant amount of valid and relevant national evidence from the Center of Disease Control and Prevention and academic research articles detailing the transmission of COVID-19 in settings like restaurants and gyms,” said Rachel Kostelac, a spokesperson from the Pennsylvania Department of Health.

“Two relevant studies that include data from Pennsylvania are posted on the Department of Health data page. The Wolf Administration continues to monitor and follow the scientific evidence brought forth to ensure the spread of the virus is contained to keep Pennsylvanians safe and our health care systems from becoming significantly overwhelmed.”