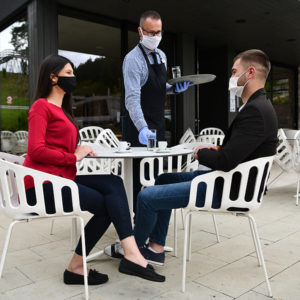 “We were not able to find transmission in gyms, and we had almost no transmission in restaurants,” Montgomery County Chairwoman Dr. Valerie Arkoosh said at a Wednesday press conference.

The data could be a life and death issue for those restaurants still struggling to make ends meet as owners have continued to burn through savings accounts to pay the bills and early relief money from Congress has mostly been spent.

Those rules are set to expire on January 4, but that still amounts to three-and-a-half weeks of what the restaurant industry is calling a de facto shutdown. Restaurants are able to continue with take out and delivery services.

During Wednesday’s presser, KYW reporter Jim Melwert asked Arkoosh if the contact tracing conducted just before the latest round of restrictions had shown significant spread from restaurants or gyms.

“Most of the transmission that we saw in restaurants was between employees or staff of the restaurant, not so much from employees to patrons,” Arkoosh said.

“Even when we were able to actually try to reach every person that tested positive — in our best efforts, we reached 68 to 70 percent of the individuals that tested positive,” she added. “So, we don’t have information about that other 30, 35 percent. So I can tell you that with the people that we reached, we did not see significant spread in those locations, but we were never able to reach everybody.”

When pressed further, Arkoosh said the restrictions had come from Gov. Wolf, “and so you really have to ask them about their thinking behind this order.”

“When we contact traced 95-98 percent of our cases, we saw very limited spread in restaurants,” Damsker told Delaware Valley Journal.  “On occasion people would report they ate lunch with someone who ended up testing positive, or a few servers/kitchen workers became ill.  But we certainly did not see cases in restaurants in any greater numbers than other businesses.

“Gyms — other than one outbreak that was traced to an outside social gathering of multiple gym members — we saw no evidence of transmission in gyms,” Damsker added.

Pennsylvania Restaurant and Lodging Association president and CEO John Longstreet said Arkoosh’s offering of the context numbers looked more like “she was trying to defend that the action that is indefensible.”

“There is no data that supports the the actions that have taken place [from Governor Wolf],” Longstreet told Delaware Valley Journal “The mere fact that the governor keeps falling back on the JP Morgan Chase credit card study as the strongest reason for this action shows that it was a catastrophic, bad decision.”

The JP Morgan study looked at millions of credit card transactions and drew a correlation between spending at restaurants and spread of the virus.

But the PRLA says data from New York contact tracing is more recent and more in-depth. The organization has used the study to call for Wolf to reverse his restrictions. That study collected data from September to November and found that about 1.4 percent of cases statewide originated from contacts in restaurants.

“The troubling information in this is that 74 percent of new cases are coming from household gatherings and living room spread,” New York Governor Andrew Cuomo said about the data.

Governor Wolf’s office did not respond to a request for comment.

“There is a significant amount of valid and relevant national evidence from the Center of Disease Control and Prevention and academic research articles detailing the transmission of COVID-19 in settings like restaurants and gyms,” said Rachel Kostelac, a spokesperson from the Pennsylvania Department of Health. “Two relevant studies that include data from Pennsylvania are posted on the Department of Health data page. The Wolf Administration continues to monitor and follow the scientific evidence brought forth to ensure the spread of the virus is contained to keep Pennsylvanians safe and our health care systems from becoming significantly overwhelmed.”

Longstreet also pointed to a Monday press conference in New Jersey in which Gov. Phil Murphy said he was unlikely to close restaurants through the holidays like Wolf did. “Do we see substantial indoor spread related to [dining indoors]? And the answer is, we don’t,” Murphy said.

Montgomery and Delaware Counties approved new grant programs this week aimed at keeping restaurants afloat, which they hope will put fresh rounds of money in needy businesses’ hands by mid-January at the earliest.

“That to me is — there’s a lot of other things that lead us to believe it was a tragic error in judgment when the restaurants were shut down. But that’s probably the most compelling thing,” Longstreet said.