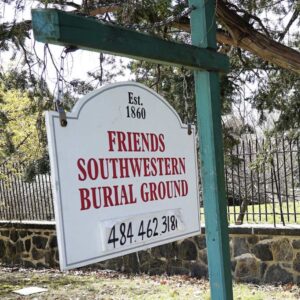 Upper Darby’s Police Superintendent Timothy Bernhardt and Mayor Barbarann Keffer participated in a virtual town meeting Sunday night designed to reassure residents in the wake of last week’s double shooting. Bernhardt said law enforcement is monitoring the area around the Friends Cemetery on Powell Lane “24-7, but Thursday’s shootings — believed to be gang-related — heightened an already-growing fear that Philadelphia’s crime surge is spilling over into this suburban community.

Both the victims, a man and a woman, are in stable condition and expected to recover. The gunfire is believed to be part of a series of retaliatory violence going back to a January shooting at the same Upper Darby cemetery.

Father Gregory Gilbert of St. Demetrios Greek Orthodox Church, across the street from the cemetery, has complained publicly about the violence and put the blame on the cemetery’s owners.

“There is an unwillingness with the cemetery across the street to ever bring in any police presence for what are essentially gang funerals,” Gilbert told reporters on Thursday. “We have begged them time and time again to have the cops come and direct the traffic to have them monitor the situation here. There’s a refusal from that side to take any action.”

During Sunday’s town meeting, the mayor and police superintendent acknowledged a problem and said township officials are working to address it.

“We want people to know that we are deeply concerned about this,” said Keffer, adding that plans are in the works for a second, outdoor public meeting — weather-permitting — for residents to ask questions of her and the police superintendent.

The mayor quickly turned the meeting over to Superintendent Bernhardt, who said the police have been in ongoing communication with the staff at Friends Cemetery, but that communications fell short on March 4.

“It has been addressed,” said Bernhardt. “The staff at the cemetery were and have been very cooperative. We are also now in communication with the owners of the funeral home conducting services that day, the Lenwood Jones Funeral Home on 59th and Girard Avenue (in Philadelphia), who have been really cooperative.”

In response to concerns from some who live in the neighborhood that there are incidents near and around St. Demetrios Church, Bernhardt assured residents that police are in the neighborhood “constantly,” and are aware of incidents with people hanging around the church parking lot. “That is unrelated to gang activity or this incident, though.”

As Delaware Valley Journal has reported, Upper Darby is suffering a surge in crime, homicides in particular. For the first time in 20 years, the number of homicides in Upper Darby broke double digits last year, when the township’s homicide rate nearly tripled — from four in 2019 to 11 in 2020.

“Our biggest contributor to that is that we border the sixth-largest city, which is Philadelphia,” Bernhardt told DVJournal. “And a lot of what we’re seeing, if not all of it, is transient crime, it’s crime of opportunity – people coming in from the city and taking advantage of the situation and then going back into the city because of how close we are. And we know what the violence is like in the city of Philadelphia right now. We’re just seeing some of the bleeding off of that here in Upper Darby township.”