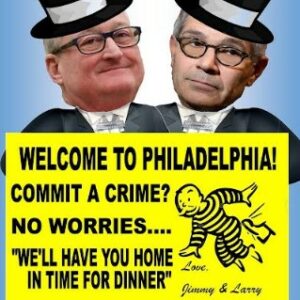 Did Philadelphia TV try to censor a joke mocking D.A. Larry Krasner during their coverage of the Mummers Parade?

The Mummers strutted their stuff down Broad Street Sunday in an annual local New Year’s tradition. It was a welcome sight — even if it came a day late — after last year’s parade was canceled by the pandemic.

But eagle-eyed viewers noticed that Channel 17, which broadcasts the parade, cut away from the Finnegan New Year’s Brigade to a random shot of the city skyline. And it happened just as the brigade was lambasting Krasner as part of its “Finnopoly” skit. Finnegan’s Captain Mike Inemer says he believes the cameraman was just being cautious about filming the signs the group displayed, making fun of Krasner’s soft-on-crime policies. 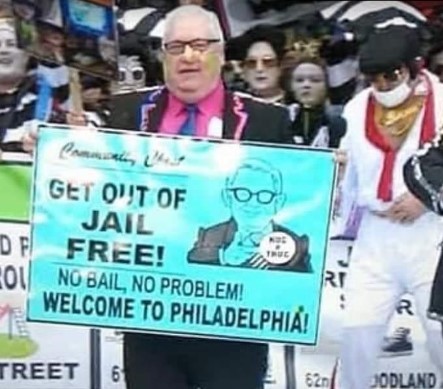 “It was when we flipped up the signs,” he said. “They thought it was something bad. But they were funny.”

Representatives of PHL17 declined to respond to a request for comment.

The humorous skit was based on the ever-popular Monopoly board game. And with the record high crime rate in Philadelphia, the group displayed “Get out of Jail Free” cards from the game, along with various humorous sayings.

While many in the crowd found the skit hilarious, others say crime is no laughing matter. There were a record 562 homicides in the city in 2021.

The parody also appeared relevant, given Democratic Congresswoman Mary Gay Scanlon, who represents South Philadelphia, was carjacked at gunpoint on a city street a few days before Christmas.

Inemer, who grew up in southwest Philadelphia, has been a Mummer since he was a teenager. Today his sons, Michael Jr., 32, and Jimmy, 31, also march, along with many other family members. His wife, Christine, helps behind the scenes with makeup and costumes.

The brigade is named for the Finnegan playground in southwest Philly, said Inemer, who now lives in Folsom in Delaware County. Inemer works at the Philadelphia Stock Exchange and said the brigade includes people from all walks of life, including doctors, lawyers, police officers, and even a Secret Service agent.

All skits were approved by Philadelphia city officials in October. They usually get their ideas from events in the news, Inemer said, hence the idea of Krasner and Kenney and the city’s crime crisis.

A first this year, all the Mummers had to undergo diversity and sensitivity training so they would not offend various minority groups. They were given written guidance and watched a video, Inemer said. 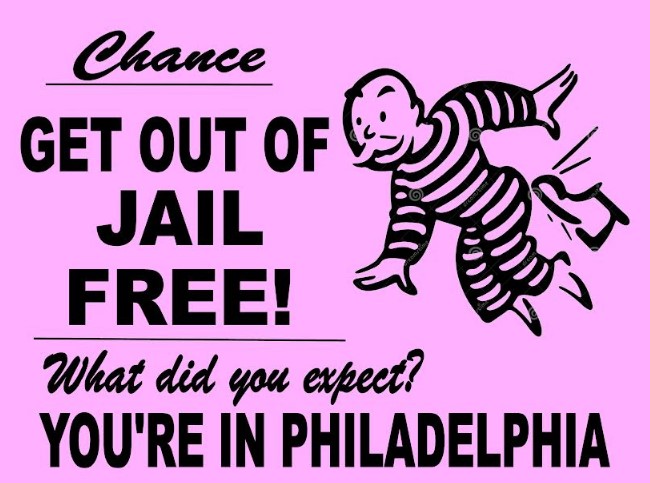 “It’s the way of the times,” Inemer said, noting most workplaces now have similar programs in place.

But Inemer and the Finnegan Brigade are no strangers to controversy. In the 2019 parade, the brigade was accused of having a performer in blackface play rap artist Jay-Z. But it turned out the critics were wrong. The person portraying Jay-Z was African American.

And in 2016, the Finnegan Brigade faced complaints about the perception of homophobia and transphobia for a skit about Caitlyn Jenner, including a critical tweet from Mayor Kenney.