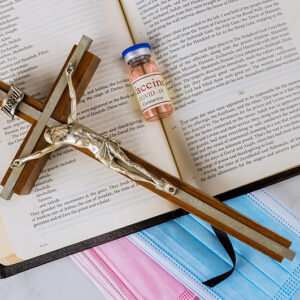 Despite the U.S. government and the Vatican allowing Catholics the freedom of conscience not to get a COVID-19 vaccine, the Archdiocese of Philadelphia has instructed its priests to deny anyone who requests a religious exemption to recent mandates.

“Individuals may wish to be exempt from vaccination based on reasons at their discretion,” Kenneth A. Gavin, chief of communications for the archdiocese, wrote in a statement first reported by The Washington Post. “In such cases, the burden of supporting such a request is not one to validate on the local church or its clergy.”

Gavin said neither the archdiocese nor its parishes will support any requests for exemptions, effectively forcing Catholics with moral qualms about the shots to get vaccinated against their will. Archbishop Nelson Perez, who has led the diocese since February 2020, offered no public comment.

The United States Conference of Catholic Bishops (U.S.C.C.B.) and the Vatican have encouraged Catholics to get vaccinated, with Pope Francis even participating in a public service announcement promoting vaccination as “an act of love.” But last December, the Vatican’s Congregation for the Doctrine of the Faith (CDF) also ruled with the pope’s approval that vaccination against COVID-19 is not a moral obligation.

“At the same time, practical reason makes evident that vaccination is not, as a rule, a moral obligation and that, therefore, it must be voluntary,” the CDF said in its “Note on the morality of using some anti-COVID-19 vaccines.”

This past January, the U.S.C.C.B. affirmed the same in its “Answers to Key Ethical Questions About COVID-19 Vaccines.”

The Biden administration’s requirement that church leaders decide who gets a religious exemption to COVID-19 vaccine mandates has created a crisis of conscience for Catholics, dividing their bishops and sparking outcry among some first amendment scholars.

In recent weeks, various U.S. bishops have taken positions at odds with each other on granting the exemptions, suggesting the faithful might simply hop jurisdictions to get a dispensation.

The bishops of Chicago, San Diego, and New York City have also forbidden their priests from granting religious exemptions to churchgoers who ask for them. But others, including all of the Catholic bishops in Colorado and South Dakota, have issued statements praising the government’s allowance for exemptions and encouraging their pastors to consider all requests.

In the midst of the resulting infighting that has erupted about whether to vaccinate, some Catholic experts on the First Amendment have blamed the nation’s second Catholic president for tormenting his coreligionists by taking away their sense of moral autonomy, and have expressed dismay that some church jurisdictions like Philadelphia are now collaborating with the persecution.

“The U.S. Supreme Court has made clear that the First Amendment forbids the government from attacking an individual’s religious belief just because it may not conform to the dictates of a particular church or its leaders,” said Peter Breen, a constitutional lawyer who serves as vice president of the Thomas More Society, a Chicago-based religious freedom advocacy group. “The government has no authority to wade into doctrinal disputes, and from a First Amendment perspective, once it is clear that a person’s religious belief is ‘sincere,’ that part of the inquiry ends.”

Breen, an Illinois state representative from 2015 to 2019, said the Supreme Court established in the 1989 case Frazee v. Illinois Department of Employment Security that a worker could not be denied unemployment for refusing to work on Sunday for religious reasons, providing a precedent to challenge Biden’s policy.

He added Biden’s policy of requiring Catholics to get “a note from the pastor” to avoid vaccine mandates contradicts the spirit of the First Amendment, a “first freedom” that protects the free exercise of believers’ consciences even from their own religious leaders.

Kathryn Jean Lopez, editor-at-large of National Review Online, said bishops forbidding religious exemptions have caused particular pain to an acquaintance who had an abortion and “feels it would be an insult to God to turn around and benefit from another child’s death.”

“This does seem to be another way we are chipping away at conscience rights in the United States,” Lopez said of Biden’s policy. “We can both encourage people to get a vaccine and respect the rights of individuals to exercise their freedom to act in accord with their conscience.”

For many Catholics, the objection to the vaccines arises from researchers using fetal stem cells in their testing and production, violating church teaching on abortion by creating and destroying human life for laboratory purposes.

“Even accepting what our church has said about moral culpability, there are people of goodwill who are agonizing over the coercion to get the vaccines—good people worried about the trajectory of a country that is expanding and not restricting the use of aborted babies in medical research,” Lopez said.

Church leaders have declared the Moderna and Pfizer vaccines less objectionable than the Johnson & Johnson vaccine because the former used stem cells only in testing, whereas the latter used them in both testing and production. They have also said the latter is morally licit if no others are available.

Ronald J. Rychlak, a longtime associate law school dean at Ole Miss and historian of Pope Pius XII, said religious exemptions for vaccines should work on the same principle of individual autonomy as conscientious objection did during World War II when soldiers on various sides made up their own minds about whether it was just to fight.

“If the church says vaccines are acceptable to the faith, I have some questions from the church’s perspective about an individual’s ability to claim it, but I guess it should follow the same approach,” Rychlak said.