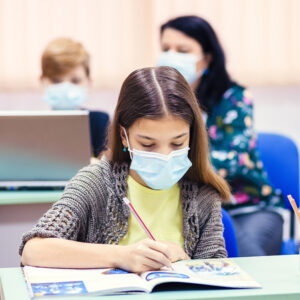 Across the Delaware Valley, parents are becoming increasingly frustrated by closed classrooms and remote learning. Some are going so far as filing lawsuits and starting political action committees. It’s a battle being waged in school districts across the country.

But in the Delaware Valley, teachers unions have largely avoided the high-profile battles of Chicago and Philadelphia, instead taking a less combative approach to working with their districts. They are polite, but firm. Despite data and anguished parents, many union officials still refuse to support a return to the classroom.

Norristown Area School District has not had any in-person instruction. When the pandemic lockdown began, teachers were allowed to teach from inside the school building. But fears inspired by the rising case count outside of schools shut that down, too.

“It’s difficult teaching from home when you don’t have all the materials… it has a totally unique set of challenges,” said Education Associations of Norristown Area President Lee Spears. However, he’s also not willing to support reopening classrooms.

At Central Bucks School District, elementary schools have returned to traditional classroom teaching, while secondary schools are using a hybrid model, along with offering all students a remote-learning option.

Asked how teachers feel about returning to the classroom, Erin Corrigan, Central Bucks Education Association President, said “there are some [teachers] who are very comfortable with it, especially since we’re in it so far now.”

She added some in-person teachers were “less comfortable” especially with “all the news with the different variants that are spreading.”

Meanwhile, the data continue to show that classrooms are far more safe from COVID spread than the community at large, and students — particularly k-8 students — rarely transmit the virus. The Centers for Disease Control and Prevention reaffirmed that classroom instruction can be done safely, pointing to a study in the Journal of American Medicine. “The preponderance of available evidence from the fall school semester has been reassuring. There has been little evidence that schools have contributed meaningfully to increased community transmission.” It’s a finding reinforced by multiple reports.

“There’s a clause in everything issued from the CDC that says basically, ‘where possible,’” Spears said. And even if his union accepted the science, “Until you can take away the stress and concern about becoming ill, it’s tough for teachers and for students to be in the right mindset to learn,” Spears added.

In a January 13 letter, Pennsylvania State Education Association President Rich Askey wrote “we want our students to return,” but “today it simply isn’t” safe to open schools to students.

The PSEA in a statement to DVJ confirmed their current stance, saying “we still don’t have a clear, transparent, statewide way to determine whether school districts are following rules designed to keep students, staff, and their families safe.” It also noted case counts outside the classroom are higher today than they were in September.

For Corrigan, the concern she has had with the guidelines is that they haven’t always been clear. “Since last March the state has put out different guidelines, and the guidelines shift and change.” One of the biggest issues she says “is about when to close a school when certain case counts occur, and when it is safe to reopen.”

Pennsylvania Department of Education Press Secretary Kendall Alexander defended her agency. “The response that PDE has taken to ensure the safety of our school communities has not shifted.” She added the recommendations they make statewide are just that, and support localities adjusting for their specific needs. “These recommendations are not a mandate; they are an option for schools to consider as they navigate pandemic-related challenges in their communities.”

Spears said he and others do not feel safe to return to the classroom until specific markers are met in the district against the virus. “Our district’s been very clear: we established these metrics… and until more vaccines become available and more become vaccinated, our district is not going to change the metrics.”

Getting vaccinated is a “huge concern for the teachers,” said Corrigan. That’s why the CBEA is pleased to see “the administrators in the district looking to any avenue to be able to roll out vaccines.” She also said state and local legislators were lobbying on their behalf.

In Montgomery County, teachers are in the 1B group according to Spears. “In the early stages, the 1B group was supposed to be vaccinated by the middle of January. We’re now into February and the talk of the 1B group isn’t even on the horizon.”

As a result of the lack of supply, teachers must either return to class without vaccinations — as many private schools across the region are doing — or children must remain trapped at home.

Concerns are only growing the longer schools remain shut as evidence shows it hinders childhood development, disproportionately affecting low-income kids and children of color. But despite the hardship, the two union officials describe what they hope are bright spots.

“I think there will be different skills that kids are going to learn,” said Spears. “Will it be a year when my students’ test scores go up through the roof? I don’t know. Are there other skills that kids are learning that they’ve probably never had the opportunity to learn before? Absolutely.”

“We have had so many teachers involved in looking at the curriculum and the essential content that needs to occur to make sure it’s not a lost year,” said Corrigan. “We’ve worked very hard to flip our instruction to meet the needs of the kids regardless of their mode of instruction.”