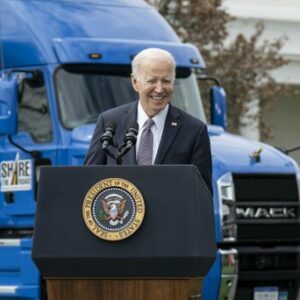 “Getting to net-zero carbon emissions by 2050 means we must aggressively cut down the largest source of emissions: the transportation sector,” said President Joe Biden’s Secretary of Energy Jennifer Granholm in April 2021. It was part of the administration’s aggressive push to reduce the use of fossil fuels and switch Americans to technologies like electric vehicles (EVs).

But a new report shows how far away the transportation sector is from that goal.

An analysis by Diesel Technology Forum (DTF) finds while emerging fuels and technologies are coming into play, more than three-quarters of America’s commercial trucks are powered by diesel.

“It was a really comprehensive look,” says Allen Schaeffer, DTF Executive Director. “We looked at different states and different powertrains, which states have added the most vehicles, and new generation diesels, which were lagging in terms of the turnover of their fleets.”

As for electric vehicles, they make up less than one percent of the commercial truck or school bus fleets. About six percent of transit buses are electric, the report found.

“It was a really comprehensive look,” says Allen Schaeffer, DTF Executive Director. “We looked at different states and different powertrains, which states have added the most vehicles, and new generation diesels, which were lagging in terms of the turnover of their fleets.”

Schaeffer says there is a commitment by truck and engine manufacturers to move toward zero-emission vehicles. Companies like Volvo, Isuzu, Cummins, and General Motors all have advanced options that include diesel as well as electric trucks.

“So, it is coming in some form, but the question is ‘how fast will that kind of transition take place?’” says Schaeffer.

The slow progress is not due to a lack of government effort. Seven major manufacturers have pledged to phase out diesel engines in Europe by 2040. At least 15 states in the U.S. are imposing quotas on sales to boost EVs in the marketplace. California wants 100 percent zero-emission passenger cars and light truck sales by 2035.

But with EVs making up about 3 percent of the cars on the road nationwide, there is a long way to go to achieve the Biden administration’s goals.

As for the push to replace “dirty” fossil fuel-powered vehicles with clean energy ones, Schaeffer says there is the option of vehicles using biodiesel and renewable diesel.

“Renewable diesel is playing a growing role in both the public and private fleets, primarily in California but also the Pacific Northwest as well,” said Schaeffer. “In the case of renewable diesel fuel, they can be used in any diesel vehicle, (so) it doesn’t have to be a new one, (and) there is no requirement for new fueling infrastructure.”

According to Schaeffer, operators using that type of fuel today could reduce their greenhouse gas emissions anywhere from 50 percent to 86 percent depending on the source of their feedstocks. Schaeffer noted using biodiesel and renewable diesel could help bring down the high cost of petroleum diesel.

“They can be blended in with petroleum diesel at any quantity,” said Schaeffer of biodiesel and renewable diesel fuel. “The future might be a lot more electric; we will have to see about that, but of course, there are many challenges there, not just with the vehicles and the charging infrastructure, but how clean is the power?”

According to the U.S. Energy Information Administration, about 61 percent of the electricity generated in the U.S. in 2021 was from fossil fuels—coal, natural gas, petroleum, and other gases. Another 19 percent was from nuclear power. Total renewables, including hydropower, wind, and solar, generated just 20 percent.

“We have not reached a point in time where renewables like solar and wind and hydro are the dominate sources,” Schaeffer said. “Some states are further down that road than others, but it’s important to understand all the twists and turns here and that’s why we wanted to do this analysis, was to say, ‘what is on the road today, what is getting the job done, and which states have higher populations of advanced vehicles?’”

And then there are the price impacts. Trucks deliver about 70 percent of all goods transported across the country, and higher costs for shipping translate to higher costs of food and other necessities. That is a tough sell when inflation is hitting numbers not seen since 1981.

“Everything we bring, eat, touch, wear, drive on is brought to you by a truck, and when prices increase…it makes it incredibly difficult to continue to do business and deliver freight,” Miller said.