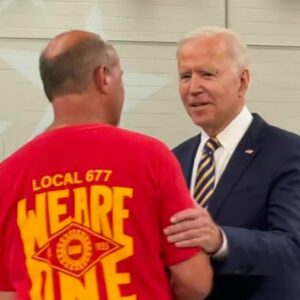 Despite Backing From Biden, Fewer Union Jobs in PA This Labor Day

It is a holiday created by the labor movement in the 19th century, but Labor Day 2021 is being observed by fewer union members. That is especially the case in Pennsylvania, where union membership – the bulk of which are in the private sector — accounted for 13.5 percent of wage and salary workers in 2020. That percentage is up slightly from 2019, but down sharply from 14.6 percent of workers in 2011.

“It is down significantly from the 1980s,” adds Elizabeth Stelle of the Harrisburg-based Commonwealth Foundation.

‘Significantly’ is a good description. The Bureau of Labor Statistics says union membership in Pennsylvania peaked in 1989 when it averaged 20.9 percent.

In terms of why there are fewer union members today, Stelle says it is hard to say what exactly is the underlying cause.

“I think a big part of it in Pennsylvania is just a change in the type of work that people are doing,” Stelle says. “Our manufacturing base is smaller than it used to be, and you have a lot of service sector employees. So it’s just a different environment, and I think that is a big part of the trends we’re seeing in terms of traditional, private-sector union membership.”

A telling example was U.S. Steel’s cancellation of a $1.5 billion upgrade to plants in western Pennsylvania, at the cost of an estimated 1,000 jobs.

“We need to keep steel mills in the United States,” said Kenny Broadbent, business manager for the Steamfitters Local 440.

Still, Pennsylvania sees itself as a union state and Philly as a union town.  Progressive Millennials in the City of Brotherly Love are organizing and encouraging others to follow suit.

“For Millennials, this is the second recession that they’re living through,” Juliana Reyes told WHYY in September 2020. “They’re like, ‘We spent all this money to go to college and get, like, a master’s degree and we’re still just scraping by and we don’t have job security.’’

Reyes also attributed it to what she called the rise of Sen. Bernie Sanders (I-Vermont) and Democratic socialism. Meanwhile, Millennials have been using social media to outline their demands and direct people on where to donate money for their causes.

“I think it’s important to be realistic about where we are right now which is that, although we are seeing new union efforts, the size of these new unions that are being formed, it isn’t like necessarily thousands of workers, it’s a few hundred workers,” said Reyes.

“Still, this is an undeniable moment and there are all these new unions in Philadelphia with different kinds of workers organizing, (including) public defenders, parking lot attendants, and even media professionals.”

Philadelphia also remains home to powerful labor unions that represent people in the building trades. These construction workers, electricians, sprinkler fitters, and other professionals hold a lot of sway in local government where unions often sit at the table with the elected officials they helped get into office.

As a result, some Republican-leaning workers are unhappy with how their money is spent.

“Unfortunately for conservative employees, about 96 percent of public-sector union political spending goes to Democrats, and that’s way out of whack with membership,” says David Osbourne, CEO of Americans for Fair Treatment (AFFT). “A lot of people are fed up with that and have chosen to leave their unions in recent years.”

That issue has been alleviated somewhat by the U.S. Supreme Court’s Janus decision, which ruled that forcing public-sector union fees onto non-members violates the First Amendment.

Still, the unions are major players in Pennsylvania politics. “Public sector unions are extremely influential in our elections,” says Stelle. “The public union PACs spent $16.7 million in the 2020 election cycle and over 90 percent of that money went to Democrats.”

Unions leaders, public and private, see the Democratic Party as their political allies, though there’s no sign in the data that the rate of union membership has been influenced by which party controls the presidency. For example, union membership hit what was at the time a record low during the last year of the Obama administration.

But regardless of who is in the White House — or the governor’s office in Harrisburg — unions are not giving up today even if membership is falling.

“My comment on why unions matter is two words: At will,” says Richard Bloomingdale, president of the Pennsylvania AFL-CIO. “Workers without union representation are at the ‘will’ of a boss, who can fire them at any time, for any reason, or no reason at all.”

With a union, Bloomingdale says workers bargain the terms and conditions of employment that result in higher wages and better benefits than their non-union counterparts.

“This is especially evident now during the pandemic, where union members can bargain for personal protective equipment (PPE) and safety measures for their workplace, while non-union workers are at the mercy of the employer,” says Bloomingdale.

“The employment contract does not discriminate against employees regardless of their race, religion, gender, sexual orientation, or any other social distinction, so the contract treats all as equals.”

“Unions are in the business of stoking fear and malcontent within any public sector workplace,” says Osbourne. “That ensures that employees feel like they need the union on an ongoing basis.”