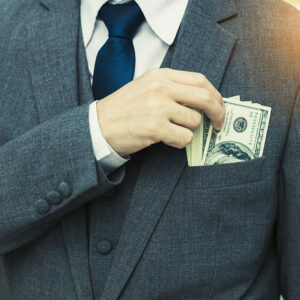 Democrats continue to kick around various spending proposals which could end up costing taxpayers as much as $5.4 trillion over the next decade, even without which the country is set to run a budget deficit right around $3 trillion for the second consecutive year. To justify this extraordinary fiscal expansion, they have continued to point fingers at a familiar scapegoat — the wealthy — claiming America’s budget woes would evaporate should they simply pay their “fair share.” But the latest data on federal revenues clearly puts the lie to this claim.

The most recent budget data from the nonpartisan Congressional Budget Office (CBO) estimates federal revenues for the 2021 fiscal year will exceed $4 trillion, an 18 percent increase relative to the previous year. Though total federal revenues decreased somewhat last year due to the pandemic, dropping from $3.46 trillion in FY 2019 to $3.42 trillion in FY 2020, this year’s increase more than makes up for that decline.

What’s more, the revenue increase is driven largely by taxes paid overwhelmingly by the wealthy. According to the CBO, 97.4 percent of the revenue increase relative to last year comes from corporate taxes and individual income taxes. The individual income tax, in particular, skews overwhelmingly wealthy, with the top 1 percent shouldering just over 40 percent of the income tax burden. Meanwhile, the major federal revenue source that is structured less progressively, the payroll tax, actually saw a $2 billion decline in receipts compared to FY 2020.

Those figures contradict the progressive claim that the only thing standing in the way of their agenda is a tax code that doesn’t adequately tax the wealthy. For years, Democrats have blamed the 2017 Tax Cuts and Jobs Act for cutting individual income tax and corporate tax rates. But even fresh off a recovery from a global pandemic-induced recession, this latest data shows that revenues from those areas of the tax code remain sizable indeed. Corporate income tax revenues are right around the level the CBO was forecasting for this year prior to the passage of the TCJA, and individual income tax revenues are even higher.

This also should make taxpayers skeptical of Democratic proposals to track down a supposedly enormous amount of tax revenue currently going unpaid, known as the “tax gap.” President Joe Biden has claimed that the tax gap is many times larger than the IRS says it is, going on to say that his agenda can be paid for if only the tax cheats could be hunted down. Never mind that doing so may involve snooping on your bank account, Biden’s claims of an enormous tax gap were always suspect, and now they are even more so.

This obfuscation is all meant to cover a simple truth — progressives can’t come close to funding their expensive, expansive agenda off the backs of the rich. Though estimates of the wealth held by America’s richest denizens can appear staggering, it represents little more than grocery money to the enormous money churn that is the federal government.

Even setting aside the Build Back Better agenda, the federal government is set to run a deficit of over $12 trillion over the next ten years. Even if the federal government confiscates every cent of billionaire wealth in the country, it would not be enough to cover the federal deficit (let alone the $28 trillion national debt) for even the next three years. Taking into account longer-term trends, like projected Social Security insolvency and spikes in the cost of Medicare, billionaire wealth represents a drop in the bucket.

Then consider that progressives are nowhere near the level of federal spending they want to achieve. Between the $32 trillion plan for Medicare-for-All, the Biden administration’s agenda, and the indeterminate but likely massive cost of a Green New Deal, the idea that these things could be funded solely by taxing the rich is a pipe dream.

It’s good to see tax revenues recovering, if only so that the debt burden passed on to future generations grows at a slightly slower pace. But Americans should also take care to note the lesson being presented here: The rich can’t help you dig out of the fiscal hole progressives want to put you in.

Andrew Wilford is a policy analyst with the National Taxpayers Union Foundation. He wrote this for InsideSources.com.