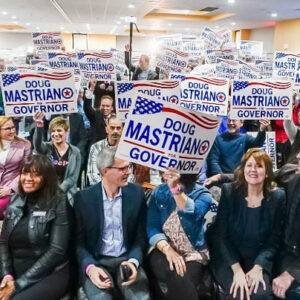 How does conservative firebrand and Republican gubernatorial nominee Doug Mastriano play in the Delaware Valley? Is his passionate America First nationalism a bridge too far for Delaware Valley residents?

There’s no dispute Matriano underperformed in the Philadelphia suburbs. While he won the state with nearly 44 percent of the vote — and 20 points ahead of his nearest competitor, former Congressman Lou Barletta — he got less than half that in Delaware County.

In Bucks County, Mastriano won 39 percent, in Chester 32 percent, in Montgomery County 36 percent and 33 percent in Philadelphia. Part of the reason is related to the fact that his competitors Bill McSwain and David White had strong connections to the area.

However, it’s also likely related to Mastriano’s far-right candidacy, including advocating a total ban on abortion without exceptions, campaigning on explicitly religious themes, and his wholehearted embrace of President Donald Trump’s unsubstantiated claims he won the 2020 presidential election. Not exactly the profile of Republicanism in the home of Rep. Brian Fitzpatrick, one of the most bipartisan members of Congress.

However, though they might not have voted for him in the primary, most Republicans the Delaware Valley Journal spoke to now say they support Mastriano in his race against Democrat Attorney General Josh Shapiro.

“I like him,” said Philadelphia resident Elliott Tessler. “But I know he has certain foibles that might be deleterious to a possible election. I’m not put off by anybody being called a Trumper or Trump supporter. That doesn’t turn me off. And his big claim to fame is championing the challenge to the (2020) election. I’m not an election conspiracy guy, but I don’t think the Supreme Court decided correctly…How do you know what the numbers were until you did an investigation?”

Austin Hepburn, a Radnor resident active in politics, is enthusiastic about Mastriano’s chances to win in the fall.

“I go fly fishing upstate, toward the Poconos, out west toward Altoona,” said Hepburn. “And in my drives, I’m just overwhelmed by the number of Mastriano signs I see. I go upstate to hunt in the fall, and I see an awful lot of Trump signs. The Trump signs are still up. So the people upstate like Mastriano. And frankly, I can’t say I’ve ever seen an advertisement for him. I’ve never seen him speak…I was a little surprised that someone came and put Mastriano signs up at our polling place. Some of the people that came in told me they were voting for Mastriano. I was taken aback by that. I was a Dave White guy.”

“And I said, ‘You know what, if the Republicans were to nominate Jesus Christ for governor, (Democrats) would still drag him through the mud and crucify him.’ So I don’t think that Mastriano is going to get any different treatment than any other Republican…The Democrats will go after anybody. It doesn’t matter. They’ll find some fault, whoever the candidate is, and try to wreck him.”

And as for Mastriano’s participation in the January 6th “Stop the Steal” protests that spun off into the Capitol Hill riot, Hepburn said he doesn’t believe that will be a problem.

“A lot of people have doubts about the election, and they want answers. It will be positive to get the base out. The Republicans can’t alienate their base like they do so often. It helps to have the base.”

But John Featherman, a Philadelphia Republican, believes the opposite is true.

“I am not a fan of him or his ideology,” Featherman said of Mastriano. “He will lose to Shapiro by 15 to 20 points. Many Republicans like me support a woman’s right to choose, as well as LGBT rights. We also don’t support ‘the big lie’ that Trump won the presidential election. Many of us will cross party lines and vote for Shapiro.”

Featherman, who ran for the U.S. Senate twice and for Philadelphia mayor in 2011 added, “Mastriano will also hurt the eventual Republican nominee from the U.S. Senate race–unless that person distances himself from Mastriano.”

Yet other area Republicans are ready to back the former Army colonel and state senator.

Myron Goldman, chair of the Cheltenham Township GOP, said, “I am glad to support a candidate who openly and enthusiastically supports conservative positions.”

“I have a part-time job in Center City Philly, and there are lots of homeless people. I work also in Levittown and northeast Philly, and the homeless are just asking for money, too,” said Brown.

Rich Booker, a former Radnor commissioner agrees that Trump’s endorsement helped Mastriano and that his attendance at the Jan. 6 rally before the Capitol riot had no affect on the primary voters.

“Trump’s endorsements seem to be based on his evaluation of who is most likely to win in the general election – after all, that is the most important consideration for Republicans,” said Booker.  “Trump’s support of Mr. Mastriano confirms that in his view, he has the best statewide ‘name recognition.’ and is the best primary candidate to reform election procedures to eliminate COVID-related and other changes that are susceptible to fraud or abuse within the Commonwealth  The Pennsylvania Republican primary electorate obviously agrees.”

And the Republican National Committee (RNC) says it is willing to do its part, too — though without mentioning Mastriano by name.

“The Republican National Committee has been on the ground in Pennsylvania since 2016, making a monumental investment this cycle as we work to elect Republicans up-and-down the ballot,” said Rachel Lee, a spokeswoman for the RNC. “Josh Shapiro would be a disaster for Pennsylvania families and workers, who will soundly reject him at the ballot box this November.”