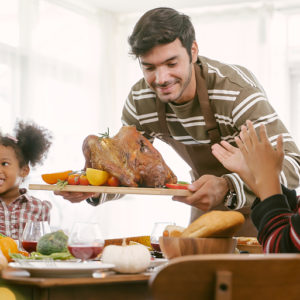 Thanksgiving, the quintessential American holiday, brings people together. Across a table, across the miles, and even across the partisan political aisle.

At the center of Thanksgiving is the dinner table. What will you find on it this year?

A Delaware Valley Journal Twitter poll showed stuffing is the favorite side dish hands down, with green bean casserole a distant second. Some Delaware Valley residents listen to DJ Pierre Robert on WMMR play “Alice’s Restaurant” by Arlo Guthrie every Thanksgiving. Robert is celebrating 40 years on the air this year. For others, it’s watching football on TV.

“My favorite activity is being with extended family,” said Bucks County District Attorney Matt Weintraub. “My favorite food is either the top of my sister-in-law’s sweet potato pie or the green bean casserole with the crunchy Durkee onions on it.”

Dave White, a former Delaware County councilman who is seeking the Republican nomination for governor said, “Thanksgiving ’til Christmas is my favorite time of year. I have great memories of all my brothers and sisters, mom and dad enjoying the holidays. I am a stuffing and turkey lover, and all my brothers and sisters, nephews, and nieces, totaling about 50 or 60, go over to my sister’s house for Thanksgiving. Followed by my favorite blueberry or peach pie!”

Attorney General Josh Shapiro, an Abington resident, and Democrat running for governor said he always celebrates Thanksgiving with his family, cooking together and watching football. He likes to cook two turkeys with his brother: One in the oven and one on the grill.

Republican gubernatorial candidate Guy Ciarrocchi said, “For almost 20 years, Thanksgiving has meant hosting my wife’s (very large) family. Chris is one of seven. Often, my mom would join us (dad passed away in 1989). Mom now lives with us. It was sad that we couldn’t all be together last year; hope to see most this year. And, we are excited that our three children will join us! I am the chef and my specialty is my mushroom gravy—a recipe of one part being taught by mother-in-law and one part my experimenting over the years. We are thankful and blessed to be together this year.”

“Our family has a favorite sweet potato recipe – it is the only thing that my kids really care about!” said Montgomery County Chair Dr. Val Arkoosh, a Democrat who is running for the U.S. Senate. “One year my sister was visiting (it was originally her recipe) and she accidentally put a cup of salt instead of a cup of sugar into the mix. It was Thanksgiving Day and the stores were all closed so we couldn’t get any more sweet potatoes for a redo — a devastating day for all involved.”

Former U.S. Attorney Bill McSwain, a Republican running for governor, said, “We always host Thanksgiving at our home in West Chester. My wife, Stephanie, and I have four children and most of our extended family is also in the area because Stephanie and I both grew up in West Chester. Stephanie’s brother and his family live near Cleveland, however, and they also join us every year at Thanksgiving.  One tradition we enjoy is having a flag football game –dubbed ‘The Turkey Bowl’– on Thanksgiving morning with our family and some neighbors. We used to do it in our backyard when the kids were small, but we eventually outgrew that ‘field,’ and moved it to nearby Hoopes Park. It can get pretty competitive, now that the kids are mostly bigger, faster, and stronger than their elders! Thanksgiving has always been my favorite holiday because it puts the focus where it should be – on family, and on counting our blessings.”

State Sen. John Kane, a Democrat who represents parts of Chester and Delaware counties, said his favorite foods are cranberry sauce and stuffing. His favorite activity “used to be playing football, but now it’s falling asleep after dinner.”