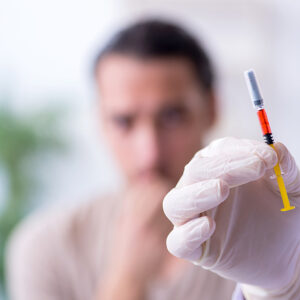 In the United States, more than 98.2 million COVID-19 vaccine doses have been administered thus far. Despite a struggle to obtain much-needed vaccine in the greater Philadelphia area, national totals have continued to rise. As the concern shifts from a supply issue to a lack of desire in the coming months, local health departments are making preparations to shift their attention toward vaccine reluctancy.

According to recent polling, about 25 percent of Americans say they have no plans to get vaccinated against COVID-19. Thirty-seven percent of Latino respondents said they would not get the shot, while nearly half of white, Republican men say they don’t plan to get it, either.

Traditionally, anti-vaccination stances have manifested from medical misconceptions. The newly developed COVID-19 vaccines add another layer of unease regarding the speed at which they were approved. Health department officials face the challenge of convincing concerned citizens of its safety.

Felice Fein, a married 54-year-old living in West Goshen, is a mother, homemaker, and community and church volunteer. She cites several reasons behind her decision to not receive the vaccine: Her overall good health, the newness of the vaccines, and the possibility of getting an allergic reaction.

When asked if there was anything health officials can do to ease her concerns, she told the Delaware Valley Journal, “I guess the point is that I am not concerned about COVID-19. If I get it, then I’ll get it and most likely recover. I believe the lockdowns and lack of social interactions are far more damaging to the economy and individual well-being.” Fein shared that if she was in a high-risk category, she would get the vaccine.

James Garrow, director of communications at Philadelphia’s Department of Public Health, addressed some of the concerns Fein brought up, commenting, “The real worry is that if enough people feel that this is not a problem, it enables the virus to continue to circulate. The longer the virus is around and actively infecting people, the more problems we run into.”

Regarding the novelty of the vaccines, Garrow said, “Our belief from the beginning of this was that the proof would be in the pudding. . . We’ve recorded no deaths here in Philadelphia. We’ve given out more than 400,000 doses of COVID-19 vaccine and haven’t had a single adverse reaction and obviously no deaths.”

“This is a safe vaccine. All of the rules have been followed in developing it and authorizing it, and we feel that all three of the options that are currently available are well tolerated and safer for folks to take,” he added.

Garrow expressed how the vaccines’ relative newness stands as another reason why healthcare workers deserve people’s gratitude. “I think that many of the health care providers may have had the same concerns that people today are expressing. And there really hasn’t been this issue of supporting them or thanking healthcare providers for taking that step, and understanding that they were taking a brand new vaccine that had never really been tested in the general public. Them taking that step has given us valuable data that we have to say to the rest of the public that this is safe,” he said.

For whatever reason, the anti-vaccination movement does not have a large presence in Philadelphia, which has made communication about the vaccine easier, he noted. Philadelphia’s robust outreach campaign has become one of the primary avenues through which they have been able to address concerns.

Already, the health department’s communication team is preparing messaging to address vaccine reluctance when doses are made available to the general public in the coming months.

Fein identified the possibility of a reaction as one of the primary reasons why she does not want the vaccine, after hearing that her son’s co-worker experienced a serious reaction. On this issue, Garrow said transparency is essential.

“There is some level of responsibility on the health department, and all health departments, to be aboveboard and to describe to people what the day after your first or second dose might look like. I think for people to say that there are no reactions to this is just patently untrue and does a disservice by hiding what ends up being a pretty crappy day or two after what’s likely to be a second dose of vaccine,” Garrow said.

“You may have a fever. You may feel rundown. There may be aches and soreness. And it’s just through that issue of being very transparent and very open and honest about the process that we can build trust in the public.” Philadelphia’s screening process during vaccine registration is also very stringent to ensure those who have a higher risk of a reaction are directed to specific sites, he noted.

“I continue to follow the rules my mother taught me as a child (and the ones I taught my own children) that are: wash your hands, don’t cough or sneeze on anyone, don’t do anything gross with your nose, and stay home when you are sick. My family used to laugh at me because from the time my children were young I always passed the hand sanitizer before eating in restaurants. Who’s laughing now?” Fein stated.

Garrow ended by stressing the importance of widespread vaccinations. “This is the way that we’re going to beat this virus and the people that we all touted as heroes just nine months ago continue to be those heroes and it’s really incumbent upon all of us to follow their lead and work to keep the rest of the public safe.”